SINGAPORE - The number of breaches of foreign worker housing rules has fallen over the past three years, the Ministry of Manpower (MOM) revealed on Wednesday (Sept 5).

However, the authorities are still keeping a close eye on private residential premises - where most violations have been found.

It conducted more than 4,600 inspections from 2015 to 2017, based on its own information, tip-offs and referrals. Inspections take place in a range of spaces, including purpose-built dormitories and private residential premises, which house close to 700,000 work permit-holders in Singapore.

The dip in contraventions comes as the authorities raise regulatory standards, such as by introducing the Foreign Employee Dormitories Act in 2016.

Under the Act, the 50 or so large purpose-built dorms here - each with at least 1,000 beds - have to adhere to stricter rules that require them to provide facilities such as ATMs, sick bays and quarantine areas in case of infectious disease outbreaks.

The MOM also imposed new requirements for factory-converted dormitories last year, and new rules for construction temporary quarters this year. The latter refers to housing at worksites or buildings still under construction.

"Over the last year, (we have) tightened regulations in terms of the maximum number of occupants you can have in private residencies. That settles the main contravention we find, which is over-crowding," Minister of State for Manpower Zaqy Mohamad said on Wednesday.

Operators might house workers in overcrowded conditions to maximise revenue or income, and he added: "That's not right. We do need to review this and enforce a lot more efficiently."

Contraventions in private residential premises are harder to catch as well, with these housing spaces being in different pockets and places.

"We have also started to tighten our enforcement efforts with the use of data analytics, to look at predictive modelling," he added, speaking on the sidelines of his visit to two workers' dormitories. "I can't specify the modelling or factors that we use, but generally it helps us better narrow down the more likely offenders."

In May, a construction company was fined $352,500 for housing more than 200 foreign workers in an overcrowded living site, compromising their safety and well-being. 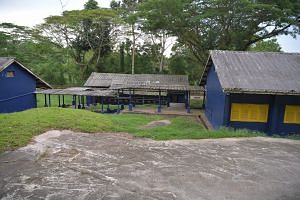 In April, a woman was charged with allowing an employer to house 21 workers in an eight-man unit, resulting in extremely unsanitary conditions.

The MOM said it will continue stepping up enforcement at private residential premises.

Vehicle operator Abdul Mannan, 26, who has lived in several dormitories in his six years in Singapore, said his current space in Tuas View Dormitory is a 12-man room which is larger than his previous unit in Tampines.

"The toilet is farther from our rooms as well, and the kitchen is big enough for us to cook together," he added.

Under the Employment of Foreign Manpower (Work Passes) rules, employers must ensure that foreign workers are given accommodation that complies with MOM regulations.

Errant employers can be charged under the Employment of Foreign Manpower Act, and fined up to $10,000 and jailed up to 12 months if found guilty. They can also be banned from employing new foreign workers.