In rapidly ageing Singapore, the demographics are worrying.

Last year, the number of babies born fell to a seven-year low, while the number of deaths was the highest in at least two decades.

On the other hand, the number of deaths rose by 4 per cent from 20,017 in 2016 to 20,905 last year, the Report on Registration of Births and Deaths 2017 showed. The report was released by the Immigration and Checkpoints Authority (ICA) on Wednesday.

The number of deaths has been on an upward trajectory since at least 1998, as the number of people aged 65 and older has more than doubled in that timeframe, academics say. There were 15,657 deaths in 1998, the furthest back that the 2017 ICA report goes.

The most common causes of death were cancer and heart and hypertensive diseases, which accounted for slightly over half of all deaths last year. More than 80 per cent of those who died were aged 60 and above.

Sociologists said the 4 per cent decline in births is significant, given Singapore's declining total fertility rate, which stood at 1.16 last year - far lower than the 2.1 needed for the population to replace itself. 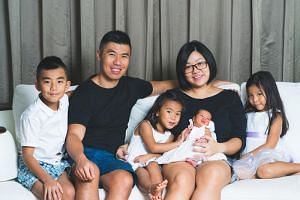 We don't see them as a burden: Couple who chose to have four children

Sociologist Tan Ern Ser said fewer babies are being born as a result of more Singaporeans remaining single or marrying later, trends that are unlikely to change.

Job uncertainty because of economic restructuring and cost of living may also factor into baby-making plans, he said, noting: "Couples may be less willing to reproduce if they are worried about the future."

With fewer births and more deaths, this creates challenges for society, experts said.

Dr Tan Poh Lin, assistant professor at the Lee Kuan Yew School of Public Policy, said fewer babies born means a smaller workforce, which affects the attractiveness of Singapore as a place to invest in.

Coupled with the ageing population, there are just fewer people of working age to support a growing pool of elderly, which may increase the strain on families, among other woes.

But there are some bright spots. For example, there are significantly fewer teenage mothers and there is a growing number of couples having larger families.

A total of 2,118 babies born last year were the fourth or more child in their families - the largest such number in the past five years. In 2013, the figure stood at 1,853.

One such couple are interior design firm boss Abigael Tay, 38, and Mr Bryan van der Beek, 41, who runs a photography business. Ms Tay gave birth to her fourth child, a son, last November. She has one daughter, 18, from her first marriage and two others with Mr van der Beek who are aged three and six.

They consider their large brood a blessing. Ms Tay said: "I have always wanted to have four kids. I grew up in a family of four kids and there was always good company around, so it was just really fun."

The births and deaths data come a day after the annual marriage and divorce statistics were released by the Department of Statistics. That data showed the number of marriages growing marginally, while the number of divorces and annulments fell slightly.