Food and beverage operators given just a few hours' notice that they would have to shut by yesterday have been scrambling to clear their inventory of sweet treats, snacks and other perishables.

But there has been an upside, as some donated them to charities and migrant workers.

Bakery chain Bengawan Solo, for example, gave the kueh and cakes it had prepared for sale yesterday to non-profits including Willing Hearts, Food From The Heart and Project Chulia Street, which supports migrant workers.

"We had already been preparing them the night before, and thought the best thing would be to give them to charity and the migrant worker community, which has been working very hard and having quite a difficult time lately," said Bengawan Solo director Henry Liew.

Like other F&B operators selling drinks, snacks or desserts as their main trade, the bakery chain will have to close all 44 of its outlets until at least May 4.

Project Chulia Street's managing director Lee Shaun Tzen told The Straits Times that the group received four trucks of goodies, including cakes and egg tarts, from the bakery yesterday. "The awesome part about this is that the donation came from a Singaporean company that is also going through a tough time," he said.

The tightening of measures announced by Prime Minister Lee Hsien Loong on Tuesday comes two weeks into Singapore's circuit breaker period, which has been extended to June 1 in a bid to limit human interaction and curb the spread of the coronavirus.

The list of services considered essential and allowed to open was trimmed to exclude some F&B outlets as well as barbers and other businesses, effective yesterday.

Bubble tea operator Playmade, which saw a rush of orders on Tuesday night, resulting in an incident between a GrabFood delivery rider and staff at its Waterway Point outlet, issued an apology yesterday.

It said it had shut all nine outlets and would be donating perishables such as Yakult, milk and fresh fruits to migrant worker donation drives at Jurong West Sport Centre and Pasir Ris Sport Centre. 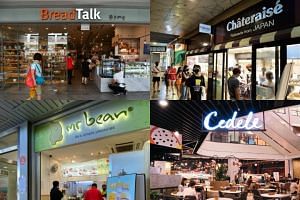 Covid-19 circuit breaker: Which F&B outlets are open and which are closed?

Cheesecake shop Cat & the Fiddle said it has had to close its three outlets, but will continue to accept online delivery orders until its existing stock runs out.

The authorities have said that online retailing of food products now deemed non-essential are allowed only if they are fulfilled from a licensed central kitchen, warehouse or approved manufacturing facility.

Some operators that have both items deemed non-essential like cakes and other items on the menu say they are confused as to whether the new rules apply to them.

Others are operating in what appear to be grey areas.

Mr Wei Chan, its managing director, said inspectors allowed it to continue the sale of cakes yesterday. "They knew that we would have had too much to throw away," he said, adding that communication with trade organisations and businesses could have been better to minimise losses and unnecessary food waste.

While its four kiosks have closed, its flagship outlet will remain open and sell bread products only. F&B outlets selling hot or cooked snacks or bread are allowed to remain open for takeaway and delivery.

Mr Ng Whye Hoe, group managing director of Pet Lovers Centre, said he was surprised to learn that all 70 stores here would have to shut.

"Pet food is an essential. We're like a FairPrice for pets, and a lot of the brands I sell in store are exclusive," he said. Long lines formed outside its shops until closing time on Tuesday night, while its e-commerce site received more than 2,100 orders yesterday alone.

Mr Ng urged customers not to panic buy, and said supply is sufficient. But delivery delays of up to a week should be expected, he said.

Circuit breaker: Which F&B outlet is now open and which closed?

A version of this article appeared in the print edition of The Straits Times on April 23, 2020, with the headline 'F&B outlets give away food to charities'. Subscribe
Topics:
More
Whatsapp Linkedin FB Messenger Telegram Reddit WeChat Pinterest Print Purchase Article Copy permalink