(THE NEW PAPER) - Running into the Lim family at their floor’s lift lobby would always bring a smile to her face.

When Mrs Dorothy Tan, 71, found out about the accident in Malaysia that killed her neighbours on Friday, she burst into tears.

“They were a lovely family,” she told The New Paper on Sunday at their Fernvale address yesterday.

She added that they were friendly neighbours. Mr Lim, in particular, would chat with her and joke with her from time to time.

At 6am on Christmas Day, the Lims’ Land Rover collided with another car while they were going towards the Johor port of Mersing.

The vehicle was believed to have hit a signboard near a bridge, before colliding with an oncoming Toyota Corolla, a Johor Fire and Rescue Department spokesman was reported to have said.

Both cars burst into flames.

Mr Barnabas Lim, 45, his wife Kristen Ng, 39, and six-year-old son died, but their four-year-old son survived after being pulled out of the wreckage.

A woman in the Toyota also died.

Mr Lim is a well-known auto-detailer here, and yesterday, the motoring community was reeling from the news.

The couple were staunch Christians and regularly posted pictures of their children and their many adventures, such as a recent trip to Korea, and a fishing trip in Rompin, Malaysia.

The much loved Land Rover also played a part in some of the family’s adventures.

They participated in TNP’s signature off-road adventure event, the SUVival Challenge for the first time this year.

Just a day before the accident, Mr Lim uploaded a picture of him and his two sons as they shared a meal from McDonald’s on the Land Rover’s roof.

Life was not always smooth sailing for Mr Lim.

He was once stateless, despite being born in Singapore and having served national service, and was the subject of a feature story in The Straits Times in 2003.

When he has born, Mr Lim’s parents were not married. His mother was Indonesian and his father was in jail. 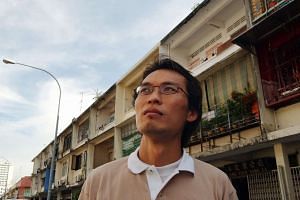 He was born here, did NS here, and will raise kids here. So why is this man stateless?

Born and bred here but he is Stateless

Mr Lim saw his father for the first time only when he was in Primary 2.

Mr Lim told The Straits Times that the freedom he was given caused him to get mixed up with drugs at an early age.

He started sniffing glue in Primary 6 and went on to abuse harder drugs like marijuana and even heroin, which landed him in jail.

The turning point came in 1999 when he met an ex-addict who had become a Christian. Inspired, Mr Lim stayed sober, focused on his job and built a loving family with his wife.

His story inspired a raft of letters to The Straits Times forum page, all lauding the young man for his journey and bravery to forge a new future.

Many spoke up for him and his stateless situation.

When he died, Mr Lim was indeed a Singaporean citizen.

Tributes that poured in show him as an upstanding man with a real love for the church and his family.

“I was here when they moved in and watched as they started their family,” she added, with a heavy sigh.

Their children were active and happy, according to another neighbour, secondary school student Sharveas Wary, 15.

Said Miss Wary, who also lives on the same floor: “From time to time, their children would play in the corridor with each other.”

TNPS understands that Mr Lim’s younger son has been reunited with his relatives here.

A Johor police officer said the child kept crying for his mother when he awoke in hospital.

Last night, the bodies were brought back from Malaysia and arrived at Trinity Casket in Sin Ming at 8.30pm.

They had flown in from Bangkok where they appear to be based.