SINGAPORE - When 3rd Sergeant (3SG) Chan Hiang Cheng Gavin arrived in Australia for Exercise Wallaby on Sept 2, he sent his parents a text, like he always did when booking into camp.

"We were not worried, because we knew that he was very independent," said his father Desmond Chan, 49, a cargo sales manager.

It was the last message that his parents received from him.

On Friday (Sept 15), Mr Chan learnt that his son, a 21-year-old full-time national serviceman, had been involved in an incident during the annual overseas drill.

3SG Chan had been guiding a Bionix Infantry Fighting Vehicle out of difficult terrain that day, when it landed on its side.

The oldest of four siblings was found unconscious next to the vehicle, while the driver and other two passengers of the vehicle were unhurt.

He was evacuated via a helicopter to Rockhampton Hospital, where he succumbed to his injuries and was pronounced dead at around 10.36pm (Singapore time).

Mr Chan and his family arrived in Australia the following morning, and they returned to Singapore with their son's body on Tuesday (Sept 19) evening.

Speaking to reporters on Wednesday (Sept 20) afternoon at his son's wake, Mr Chan said he wanted to tell the three other servicemen involved in the accident that his family is doing okay.

"I want the three of them to go ahead, think positive, don't feel bad - life still moves on," he said.

He added that his son was a role model to his younger siblings, and a helpful man who used to raise funds for organisations such as the Society for the Prevention of Cruelty to Animals.

"Gavin has been a very good son... he never gave us any problems, didn't demand for anything, and just celebrated his 21st birthday," said Mdm Lim Teck Kheng, 50, 3SG Chan's mother.

The only thing he wanted, she added, was a chocolate cake to celebrate the milestone.

She said he applied to the Yale-NUS College previously, and had also considered studying abroad after completing national service.

Mr Chan and his wife thanked the Singapore Armed Forces for arranging for them to travel to Australia in after the incident, which happened at the Shoalwater Bay Training Area in Queensland. 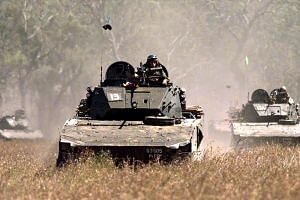 Body of NSF, who died during training in Australia, flown back to Singapore

NSF, who died during Exercise Wallaby, was guiding vehicle in difficult terrain when it landed on its side

While there was a safety pause on training in the area as investigations took place, training for the army resumed on Sunday.

3SG Chan will be accorded the honours of a military funeral, and the cremation ceremony will be held at Mandai Crematorium on Saturday (Sept 23).

The Defence Ministry is currently exploring means to have his unit return to Singapore, for them to pay their respects.

At least 50 people, including 3SG Chan's friends and relatives, were present at his wake in Pasir Ris on Wednesday. Deputy Prime Minister Teo Chee Hean, who is also an MP for Pasir Ris-Punggol GRC, also turned up to pay his respects. Zainal Sapari, DPM Teo's Pasir Ris-Punggol GRC colleague was also present.

Asked how the family is coping, Mr Chan said: "To lose a son is a very, very painful feeling. To lose a good son, I can't swallow it."

Tearing up, he added: "(Gavin) was a good son... no words can describe how we are feeling now."