SINGAPORE - The industrial building burnt from Thursday (May 4) morning's fire has been found to be structurally sound, but in the interest of public safety, the Building and Construction Authority (BCA) has cordoned the affected area until rectification works are completed.

The professional engineer appointed by the building owner has inspected the eight-storey industrial building at 30 Toh Guan Road, managed by Cambridge Industrial Trust (CIT) Management, and confirmed that its structural integrity is not affected, BCA told The Straits Times on Thursday.

Even so, BCA said the affected area, including the area below the damaged cladding, has been cordoned and closed for public safety until rectification works are complete.

Building management said earlier on Thursday that it was working with relevant authorities to reopen the building.

The appointed professional engineer will be conducting a detailed investigation to assess the condition of the remaining cladding and will submit a report to BCA including recommendations for permanent rectification works. 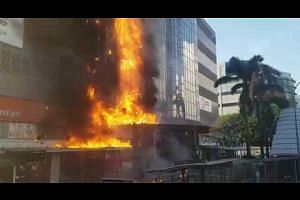 Woman, 54, dies after fire breaks out in building opposite IMM in Jurong East

BCA's own engineer found that part of the front external wall cladding - from the first storey to the roof of the building - was damaged by the fire.

The fire had engulfed the building opposite IMM at around 7.30am.

Fifty people were evacuated from the building, and a 54-year-old woman, Madam Neo Siew Eng, was taken to hospital, where she was pronounced dead.

The fire was extinguished within 40 minutes and confined to the facade of the building, the Singapore Civil Defence Force said.

SCDF is currently investigating the cause of the fire.