SINGAPORE - Shorter waiting times as well as more privacy and comfort can be expected for residents living in the northern part of Singapore when they visit the newly launched Woodlands Divisional Headquarters.

Police officers from the division will also be able to attend to cases faster, thanks to new systems and technologies at the headquarters, which was opened by Minister for Home Affairs and Law K. Shanmugam on Tuesday (March 12).

"Members of public will no longer have to travel to the division headquarters in Jurong or Ang Mo Kio to meet the IOs (investigation officers) for updates in their cases," he said, adding that the new headquarters will also reduce the travel distances for frontline resources to get to crime scenes.

Describing the new headquarters as "modern", he said it includes new systems and technologies that will be introduced later in other neighbourhood police centres (NPCs) and police posts.

Mr Shanmugam cited a new centralised system to conduct one-stop screening across all Singapore Police Force databases. This erases the need to conduct screenings against several separate databases, which he called "a waste of time".

"Screening can take five minutes now compared to 20 minutes in the past," he said.

During a tour of the facility, Mr Shanmugam was shown the new triage system in the lobby, where visitors will be filtered to the various channels based on the purpose of their visit. In this way, it could halve the time they spend there. 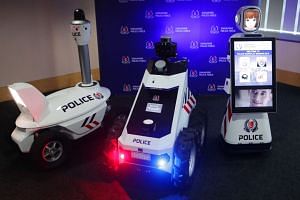 Police officers will have support of leaders: K. Shanmugam

This is how it works: when someone enters the lobby, an Integrated Queue Management System (IQMS) will find out what they are there for - such as lodging a police or posting bail for someone - and then guide them to the next step.

The IQMS is part of a new system being rolled out at the 10-storey building in Woodlands Street 12, along with features like self-help kiosks and an automated found property drop box, that will improve the services of the Singapore Police Force.

The drop box allows users to easily register and hand over the items they found, without the need to wait for and see an officer to make a report. Instead, the finder will receive an acknowledgement slip while the item is automatically bagged, instead of having it done manually.

At the Woodlands West NPC located within the building, frontline counters have been redesigned, with members of the public meeting officers in private glass rooms instead of at the traditional open counter.

The aim is to provide more privacy and comfort when sharing information with the police officers on duty.

"Both together served a residential population of over two million, and cover a larger land area than all the other land divisions combined," said Mr Shanmugam.

"But as our population has increased, population centres have shifted. The northern part of Singapore in particular has seen strong growth in the number of residents and businesses in recent years."

DAC Chan said that the biggest challenge in setting up a new police division is the human element.

Calling the setting up of the new division a "fantastically complex operation", he said that while it involves the hardware aspect, such as getting the budget and equipment for the new building, getting the officers to work together in a new environment and with new processes was the hardest part.

"We took over areas that were from Ang Mo Kio Police Division and Jurong Police Division, so we had to bring in two different kinds of practices to work together," he added.

The new division took over three neighbourhood police centres from Ang Mo Kio Police Division and two from Jurong Police Division, along with the police elements of the Tuas and Woodlands Checkpoints.

He said work to staff the new division began over two years ago to ensure a good mix of new and experienced officers.

"We handpicked quite a lot of officers who did lateral postings, not just from Ang Mo Kio and Jurong (police divisions) but from all across the police force," added DAC Chan.

"They brought to the table experience in the same job function but from different units."