The "premium tilapia" are also disease-resistant and rich in Omega-3, and are being bred in Temasek Life Sciences Laboratory (TLL).

The tilapia will join the ranks of locally produced fish stock - TLL-bred sea bass and barramundi developed by Barramundi Asia.

Scientists say a small country vulnerable to food disruption needs high-tech and high-intensity fish farming to help it be self-sufficient in producing its own food.

Last year, only 9 per cent of all the fish eaten in Singapore were produced locally.

To develop the superfish, the lab has been collaborating with the Agri-Food and Veterinary Authority (AVA) on improving the yield and quality of tilapia through selective breeding.

Researchers from the lab identify and mate the best fish, also known as the brood stock, to produce schools of tilapia that inherit the superior traits. 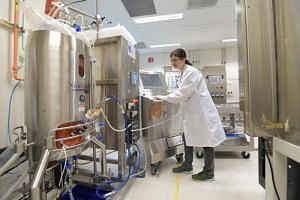 Since Asian consumers prefer red tilapia, selective breeding also transfers the desired appearance to the offspring. The lab has a mix of red and grey-coloured fish.

Currently, the team is working on improving the resilience of the fish so that they can thrive in crowded fish farms and adapt to seawater.

"Tilapia is a traditional brackish-water or freshwater fish. In Singapore, we don't have much freshwater sources. But we have a lot of coastal lines, so we are working on adapting our tilapia to grow in seawater," said Dr Liew Woei Chang, research investigator at TLL.

TLL is also using a sex-reversal method to produce all-male tilapia as the male fishes grow twice as fast as the female ones. The lab said more male fishes will also prevent unwanted breeding.

Some of the "premium tilapia" have been sent to local fish farms to assess their performance and ability to withstand stress.

"In the wild, the fishes have a lot of space to swim so growing in a high-density environment can be stressful for them.

The tilapia breeding programme started in 2011 and TLL is hoping to commercialise the fish in the coming years.

It took 15 years for sea bass developed at the Marine Aquaculture Centre on St John's Island to reach farms for mass production in 2018.