SINGAPORE - The family of a motorcyclist who fell into a coma after being hit by a falling tree branch is suing the National Parks Board (NParks) in the High Court, seeking damages for alleged negligence.

The case is being closely watched as it may clarify the extent of the NParks' liability in such cases, if any.

The wife and sister of Mr Lee Kar Choon allege the accident on July 20, 2016, showed NParks' negligence. The pair were appointed by the court in June as his deputies under the Mental Capacity Act, given his extensive disabilities.

The NParks is denying the claims in defence papers filed in what is the first reported suit against the Board in such circumstances.

Mr Lee, then 23, was riding his motorcycle at 6.30am along Admiralty Road West towards his workplace at Woodlands Loop when the tree branch fell.

It caused him to be flung off the motorcycle and he suffered head injuries. He lapsed into a coma and was admitted to Khoo Teck Puat Hospital before being later transferred KPJ Ipoh Specialist Hospital in November 2016.

Mr Lee, a Malaysian, lived with his wife Madam Chai You Yuet, 23, and a two-year-old daughter in Johor Baru and worked as a production supervisor here.

He continues to receive treatment in Ipoh where he remains in a vegetative state because of the severe traumatic brain injury.

In court papers, his lawyer N. Srinivasan from Hoh Law Corporation alleged the accident was caused by NParks' negligence in failing to reasonably maintain the trees in a healthy and stable condition so as not to pose a danger to road users.

Among other things, he further alleged that the NParks failed to conduct adequate crown reduction pruning exercises to limit tree exposure and damage from adverse weather conditions. 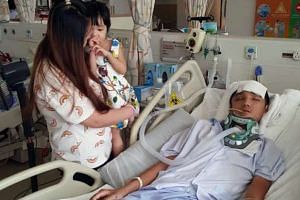 'He has to wake up soon': Malaysian still in coma after falling tree hit his bike as wife discovers she is pregnant

The Board, defended by Senior Counsel Lok Vi Ming, said there was a system in place to assess the condition of the trees along Admiralty Road West including regular inspections, and maintenance works were carried out on trees along the road.

Tree inspection was conducted by an arborist on March 10 2015, followed by tree removal and pruning some three months later. Pruning was also conducted in Jan 2016.

He added that the tree was healthy and the cause of the tree branch breaking was likely to be exposure to unusually stormy weather for days leading up to the incident, accompanied by wind speeds of up to 50 km per hour.

Mr Lee is seeking damages to be assessed for pain, suffering and loss of amenities, medical costs and treatment as well as loss of earnings.

A High Court pre-trial conference is due later this week.

An NParks spokesman declined comment "as this matter is before the courts".