Spare a thought for the 22 hardy souls who braved an overnight water conservation camp this weekend and the hardships that came with it, like having to use a damp towel dipped into a bucket instead of enjoying a nice hot bath.

The camp at Marina Reservoir, which was the first of its kind here, aimed to show five families – mums, dads and kids – and two other adults that water conservation is both vital and achievable.

They had to live on around five litres of water for 12 hours from Friday evening to Saturday, and were obliged to fill out a ration card every time they collected water from jerrycans and dispensers as the taps were turned off.

Most of the families found living on five litres of water slightly challenging. Mrs Lynn Liu, 39, who was at the camp with her three daughters, said she was a little uncomfortable with her children doing a towel wipedown instead of having a shower.

“I guess one night without a shower is acceptable. But I am worried they would feel itchy in the night because they are young and their skin is sensitive,” said the Chinese- language teacher.

But the members of one family found the five-litre challenge a walk in the park as they adopt environmentally friendly practices at home.

Mr Adam Reutens-Tan, 42, and his 11-year-old daughter have been using water-saving portable outdoor camp showers at home for three years.

He and his wife spray water onto the tiles using a water bottle instead of filling a bucket when they want to mop the floor.

He added that the family’s utility bill is below the average amount paid by residents in their condominium and the family of four used only five cubic metres of water last month.

Ms Adeline Goh, 39, who attended the camp with her husband and two children, said: “Although we are also saving water at home by using used water to flush the toilets, for instance, learning through fun and measuring the water helped our kids be more mindful about how much water they were using.” 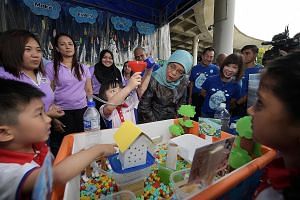 The Water For All Camp, which was held in conjunction with Singapore World Water Day yesterday, was organised by environmental and outdoor education company Better Trails and held in partnership with Waterways Watch Society and supported by PUB.

Better Trails co-founder Ding Kian Seng said he was moved when he saw Ms Goh’s family collecting more water from their rations not only for themselves, but to cook eggs and make Milo for the other families.

“Adeline was not just saving water for her family, she was also generous in sharing her rations with everyone,” added Mr Ding, who led the camp.

A version of this article appeared in the print edition of The Sunday Times on March 03, 2019, with the headline 'Families live on 5 litres of water at overnight camp'. Subscribe
Topics:
More
Whatsapp Linkedin FB Messenger Telegram Reddit WeChat Pinterest Print Copy permalink