SINGAPORE - The extraordinary stories of four ordinary Singaporeans will take centre stage at this year's National Day Parade (NDP), exemplifying through a series of short films the different generations who have contributed over the years to Singapore's formation and transformation.

Mrs Iris Verghese, 73, was a health worker who reached out to Singapore's first Aids patient in 1985 amid a climate of fear and has dedicated years since to supporting Aids patients and their families.

Madam Helen Joseph, 90, risked her life as a 12-year-old to secretly pass sandwiches to starving prisoners of war at Rangoon Road Camp during World War II.

Rapper Danial Bawthan, 25, who has muscular dystrophy and goes by the artiste handle Wheelsmith, and social entrepreneur Anil David, 51, who set up a call centre to provide jobs for fellow former convicts, round up the quartet.

Their stories feature prominently across the 10 short films of about 1½-minute-long each and eight animations directed and produced by local film-maker and parade multimedia director Royston Tan that will be screened during the parade on Aug 9.

The films and animations are spread over the seven parts of NDP 2019, made up of a prologue and six acts.

"With multimedia, we wanted to be consistent from the onset in showcasing this year's theme of the shared values of different generations," said Major Wong Wai Keat, chairman of the NDP 2019 multimedia committee, on Monday (July 15).

One idea the 250-strong multimedia team settled on was a count-up animation of 700 years of Singapore's history, running from the 14th century to the present day, that appears in the parade's first segment. 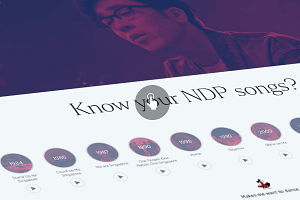 Do you know your NDP songs?

How to perform the perfect flypast

The forward passage of time alludes to each new generation stepping up to succeed the old in creating Singapore's future, explained Maj Wong.

This year is the first time both Maj Wong and Mr Tan have been part of bringing the NDP to life, a process that has run for nearly a year.

Mr Tan, 43, said the extended nature of the project took some getting used to, considering each feature film he produces only takes up an average of 33 days.

Each film or animation also has to run in tandem with the parade's live elements, such as the Mobile Column and the on-stage performers.

For example, rapper Wheelsmith makes a live appearance shortly after the video segment of him telling his story concludes.

Mr Tan said: "This was very different from making a feature film, because if you over-run five seconds here or five seconds there, it affects the entire production.

"There were times when we had to re-shoot and get the (interviewees) to basically say the same thing five seconds faster."