SINGAPORE - If not for his interests in toy collecting and comic books, Mr Jedd Jong, 24, may have found it hard to make friends from a different social class, he reckons.

The film critic and writer came from an elite school and lives in private housing, but has many friends from non-elite schools and who live in Housing Board flats, whom he got to know through his hobbies.

His social network illustrates the findings of an Institute of Policy Studies survey released yesterday - that people from elite and non-elite schools, and those who live in public and private housing, are not really mixing.

But the more they play sports and take part in cultural activites or voluntary groups, the more diverse their networks, the Study on Social Capital in Singapore also found.

"Many of my current friends I met through the cosplay community. I'm not a cosplayer, but I am a geek, so I like hanging out with other geeks," said Mr Jong, adding that he thinks it would have been hard to make friends across social groups without the common interests.

The study, which is the first of its kind, has led to some experts warning about a class divide emerging in Singapore.

Those who spoke to The Straits Times called for policies that encourage more mixing along class lines to mitigate this. 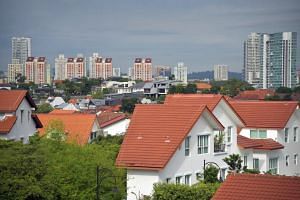 National University of Singapore sociologist Vincent Chua, who researches elite school networks, said students from higher-status backgrounds may tend to have a higher chance of entering elite schools due to better academic performance, for instance.

With schools being one of the places which give students more chances to know peers from different backgrounds, it would not be ideal if top schools became less diverse, added Dr Chua, who worked on the study with NUS sociologist Tan Ern Ser and IPS deputy director Gillian Koh.

Pointing to a change in admisson rules in 2014 that required all primary schools to set aside 40 places for chidren with no connections with the school, Dr Chua said this was a move in the right direction.

He suggested expanding the proportion of such places, and also limiting the number of places alloted to children of alumni members.

But Associate Professor Tan said putting different groups together "does not by itself lead to integration", adding that those who entered the school based on quota systems may not necessarily be able to gel with the "mainstream".

He suggested activities and projects across schools that would encourage students from different backgrounds to mingle and work together towards a common goal, such as the Outward Bound Singapore camp that all Secondary 3 students will go for from 2020.

The researchers said the Government can encourage more volunteering, including via religious and community organisations, and more sports activities, to widen people's networks.

But the onus is also on individuals to step out of their comfort zones, they added.

The researchers said that people may not be mixing with those outside of their social class because they feel there would be cultural differences and believe those of other classes would not be interested in socialising with them.

Said Dr Koh: "Our call to action is to mix more without consciousness about status - hopefully we find many platforms where status doesn't matter."