SINGAPORE - An exhibition featuring the royal regalia and artefacts from Brunei, as well as stamps and currencies from Brunei and Singapore will open from Thursday (July 6) at the Singapore Philatelic Museum (SPM).

Called Abode of Peace & the Lion City: A Brunei-Singapore Exhibition, it will be held to celebrate the "deep-rooted friendship" between the two countries and the Golden Jubilee of a currency agreement they signed, SPM said in a statement on Wednesday.

For the first time in Asia, items from Brunei's royal regalia will be on display outside the country at the exhibition. Some 33 items will be on show, including items used during the 1968 coronation ceremony and 1992 silver jubilee ceremony of Brunei's Sultan Haji Hassanal Bolkiah Mu'izzaddin Waddaulah.

Exhibition visitors can also view 66 artefacts dating from 960 AD to 1970s loaned from the Brunei Museums Department. These include early forms of currency, blue porcelain ware from a shipwreck in Brunei, textiles and 19th century brass containers.

The exhibition is jointly curated by the SPM and Brunei's Ministry of Culture, Youth and Sports, and will be held from Thursday to Feb 28 next year here. 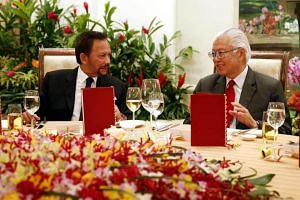 A second part of the exhibition will run in Brunei from November to April next year, which focuses on Singapore's multiculturalism and efforts at urban greening. 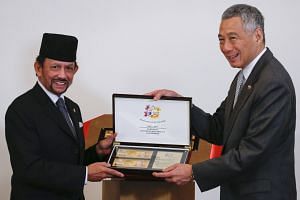 Ms Tresnawati Prihadi, SPM's general manager, said that the exhibition will enable people in Brunei and Singapore "to gain a deeper appreciation of each other's history and culture, as well as long-standing political, social and economic ties".

Mr Abdoh Damit, acting director of culture and the arts at Brunei's Ministry of Culture, Youth and Sports said that the country's royal regalia and other artefacts on display are treasures of Brunei, and "we are proud to be able to share our culture with Singapore".

SPM said that the exhibition showcases the links between the two countries, such as those in history and bilateral cooperation.

The Singapore part of the exhibition will feature aspects of the Brunei Sultanate, Brunei's history, its ethnic communities, and flora and fauna.

Almost 600 stamps and philatelic materials from SPM's permanent collection and the Brunei Postal Services Department, as well as 42 pieces of currency notes and coins from 1967 to 2017, loaned from the Autoriti Monetari Brunei Darussalam and the Monetary Authority of Singapore, are on display as well.

The exhibition will feature interactive multimedia exhibits, including a vending machine by students from Nanyang Polytechnic's School of Interactive and Digital Media which allows visitors to download a Brunei or Singapore stamp on their mobile device.

Visitors can also immerse themselves in an interactive 360 degree video of the Temburong River in Brunei's Ulu Temburong National Park which is home to endangered wildlife.

SPM will also organise a Brunei Cultural Showcase from Saturday to Sunday (July 8-9), featuring cultural performances by musicians and dancers from Brunei. Children can try out handicraft activities and dress-up in ethnic Bruneian costumes. Foodies can enjoy dishes and treats prepared by Bruneian chefs at the showcase, too. This includes the national dish of Brunei called ambuyat, a dish of starchy sago palm.