A 24-hour lab where students can nap, a striking learning hub that supports a novel teaching method, and a natural history museum set in the heart of a university, complete with dinosaur skeletons.

These are some of the new buildings and facilities the six local universities have introduced in the past few months, ahead of the new school semester, which starts this month for most full-time university students here. 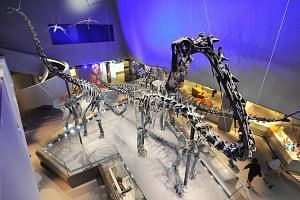 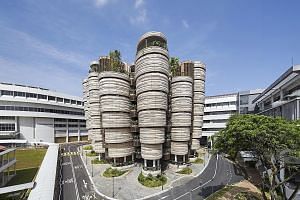 NTU: Hive for learning in a 'flipped classroom' 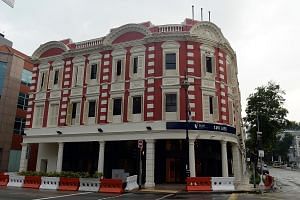 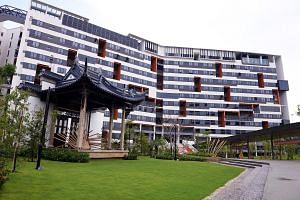 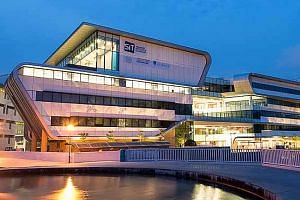 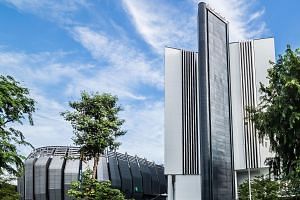 This reverses the traditional teaching approach by delivering instruction, often online, outside of the classroom, leaving classroom time for deeper learning activities such as discussions.

The building, which resembles stacks of dim sum baskets, was dreamt up by renowned British designer Thomas Heatherwick, whose notable designs include the cauldron for the flame at the 2012 London Olympics. Each of the building's 56 "smart" classrooms comes equipped with flexible clustered seating, electronic whiteboards and multiple LCD screens.

The Singapore Management University (SMU), too, has added more spaces for project-based learning and group study at its city campus.

Last year, it introduced the SMU Labs. Occupying the old MPH building in Stamford Road, the 24-hour facility - which will be used to teach modules where students learn through real-world projects with organisations - features rooms with specific functions. These include a white room where ideas can be scribbled on the walls and floor, and another room filled with sofa beds for power naps.

Among the new buildings at the National University of Singapore (NUS) campus at Kent Ridge is the Lee Kong Chian Natural History Museum, which opened in April.

Singapore's first natural history museum also serves as a research and education facility focusing on biodiversity in the region.

Professor Rudolf Meier, deputy head of the museum, noted that biodiversity appreciation is an important part of the university's programmes in environmental sciences, and it had designed the museum's gallery as a teaching tool for life sciences, environmental studies and general education.

"However, our education mission extends beyond the university," he said, adding that the museum organises a variety of activities for the public.

It has drawn crowds, including tourists, to view its collection of more than 2,000 specimens, such as the fossils of three diplodocid sauropod dinosaurs, among the biggest creatures to walk the earth 150 million years ago.

The two buildings, completed in the second stage of a $300-million development of the SIM campus in Clementi, house added learning facilities, as well as more sports and performing art spaces. These include a financial training centre and a performing arts theatre that can seat 460 people.

"Our students now have more opportunities to participate in a range of activities that can develop their competencies," said SIM executive director Ronald Tan.

In recent months, a few institutions have moved from their former campuses into new homes.

Students at Yale-NUS College, NUS' tie-up with the  Ivy League institution Yale, will start the upcoming semester at a 63,000 sq m campus in Dover Road. The liberal arts college relocated from its temporary site at the NUS University Town last month.

Students will have a range of facilities - from well-equipped science laboratories to art and dance studios - to meet their learning needs. They will be able to reside in mixed-gender residential suites and can socialise with their peers in communal spaces, such as common lounges.

The Singapore University of Technology and Design (SUTD), which enrolled its first batch of students in 2012 at a temporary campus in Dover Road, moved into its permanent home in Somapah Road in Simei earlier this year.

The two houses, pavilion and Chinese opera stage from the Ming and Qing dynasties - restored by a team of Chinese craftsmen - are now used as either teaching or recreational spaces.

Unlike other institutions, SUTD does not have dedicated buildings for the various academic faculties. Instead, the campus is designed as an interconnected learning environment. This was created to foster collaboration among SUTD's community of students and staff, said its president, Professor Thomas Magnanti.

Students enrolled in overseas university degree programmes at the Singapore Institute of Technology (SIT) will be able to attend classes this year at five satellite buildings - one at each of the five polytechnics here.

Previously, these students attended classes and used facilities at the polytechnics, but had no place to call their own.

The SIT campus in Dover, which houses its administrative offices, will continue to conduct SIT's own degree programmes.

Facilities at the five SIT@Poly buildings vary according to the overseas degree programmes offered. Its building at Singapore Polytechnic, for instance, has acting and animation studios for game development.

SIT provost Ting Seng Kiong said: "With the buildings, our students can feel at home even as they attend classes within the polys."