SINGAPORE - People's Action Party ministers and Workers' Party (WP) leaders exchanged words on Thursday morning (March 8) on WP chairman Sylvia Lim's comment last week, when she voiced her suspicion that the Government had intended to raise the Goods and Services Tax (GST) hike immediately but that it backtracked after negative public reaction.

This is an edited transcript of the exchange, between Leader of the House Grace Fu, Finance Minister Heng Swee Keat, Ms Lim and WP secretary-general Low Thia Khiang.

Sylvia Lim: After the debate on March 1, I had time to track back what led me to have the impression and suspicions I articulated during the exchanges with the ministers. I would like to share these findings.

Since 2013, the Prime Minister had said that our expected increases in spending would require more tax revenue. Finance Minister Heng had also made a similar statement in last year's Budget saying that the Government was studying how it would raise revenue through new taxes or raising tax rates. These statements were very general and did not specify any time frame for the raising of taxes.

In November 2017 during the PAP Convention, Prime Minister Lee announced definitively that the Government would be raising taxes as government spending on investments and social services grew. He further stated that Finance Minister Heng was right when he said raising taxes was not a matter of whether but when.

Naturally, these announcements concerning tax increases set off public discussion and speculation. Three days later, the Ministry of Finance issued a statement that PM Lee's announcement at the PAP Convention was in line with a much earlier statement made by DPM Tharman in 2015. DPM Tharman had then said that the revenue measures that the Government had already undertaken would provide sufficiently for increased spending planned until the end of the decade.

The MOF statement did not definitively say that there would be no tax increase in this Budget. Hence, the uncertainty over whether taxes and, in particular, GST would be raised this Budget continued even after the MOF statement. This was further fuelled when MOF office-holders kept up the discussion on raising taxes in the immediate run-up to the Budget Statement saying they were working on the "when". Prominent economists went on record to predict that the GST rate would be raised in 2018 or 2019.

What is notable is that nowhere in the discussions just before Budget 2018 did the Government publicly commit that they would not raise GST before 2021. This was only announced on Feb 19 during the Budget Statement.

Thus, during the heat of the exchanges at the Budget round-up, I articulated my suspicion. In doing so, I believe I was doing my duty as an MP to convey ground concerns, reactions and confusion. I did not accuse the Government of being untruthful as alleged, and neither had I intended to accuse the Government of dishonesty. I do not accept the over-characterisation the PAP MPs have put on my words and intentions, based on their own interpretation borne out of overactive imaginations and over sensitivity.

Since the Government has now refuted that it had any intention to raise GST immediately, I can accept that my suspicion then may not have been correct. 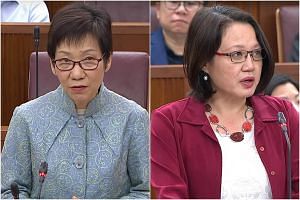 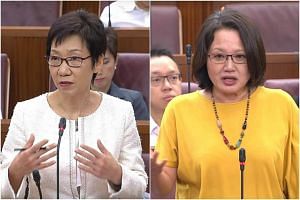 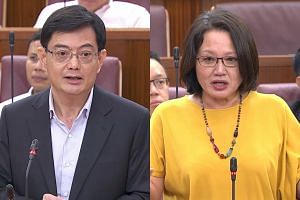 No contradiction, no backtracking in GST decision: Indranee

Grace Fu: I thank Ms Sylvia Lim for admitting that she had made a suspicion, although she has said that she has not accused the Government of dishonesty. But let me put the facts here. She made the accusation in the House, at that time she didn't have the facts with her. Minister of Finance put the facts squarely before the House inviting her to question as a witness, but she didn't make any attempt to do that.

Ms Lim is saying that the Government is saying one thing in public but planning secretly to do another. So I am disappointed that she has failed to apologise to this House for making this false allegations.

And I think the privilege that parliamentarians enjoy come with responsibility that whatever we say here if you do not have the facts you should check them and should consider whether the remarks have indeed hurt the integrity of the members. And I put to the House that indeed they have.

So I would like to just remind members of the House that they may not abuse this privilege to misrepresent facts or mislead Parliament. They're not entitled to make unsubstantiated allegations without taking steps to check the facts or knowingly maintain the allegations they have been shown to have no factual basis.

Unlike her colleague NCMP Leon Perera who both withdrew and apologised to this House for making misleading statements in a recent case, Ms Lim has refused to apologise. By so refusing, her conduct falls short of the standard of integrity and honour expected of all members. I must therefore put the honourable member on notice, and the rest of the House too, that if she repeats such dishonourable conduct and abuse parliamentary privilege I'll refer the matter to the committee of privileges.

Sylvia Lim: If the government had indeed been so clear of its intentions not to raise GST before 2021, why is it that the public was so worried that this would happen, why was it that the economists came up with reports to predict that the GST rate would be increased in this budget? Are they all dishonest and hypocritical?

Secondly, perhaps we can get some clarification from the Leader on the standards expected in this House, and I'd like to quote this statement from Cabinet which was made in the House quite recently: "If MPs believe that something is wrong, it's MPs' job to pursue the facts and make these allegations in their own name, decide whether something seems to be wrong. And if you think something is wrong, even if you're not fully sure, then come to this House, confront the Government, ask for explanations and answers."

This is a quote from Prime Minister Lee during the closing debate on 38 Oxley Road. So I'd like the Leader to clarify if there a difference in standard here - one standard when the PM's name needs to be cleared and another standard when we are talking about raising taxes on the people?

Grace Fu: In this chamber we often make representation and bring forth the views from our constituents, from our stakeholders. This is expected of us.

But we have a responsibility when we bring the matter to this place because this chamber is for serious debate, for making of laws, where we have serious discussions about the future of Singapore. So before we bring the opinions, the speculations, the views, the unhappiness to this chamber, we need to check the facts. Ms Lim has admitted that she didn't do so in the first instance.

But having said so, after she has brought the matter here, we have laid down the facts to her. And yet she continued to insist on the allegation. This is the difference between what we say in this chamber and what economists, analysts say outside this chamber.

Sylvia Lim: I do not see any reason for me to retract these statements which I made during the exchanges with the ministers. As I mentioned in my earlier statement there was a sequence of events which led me to have that suspicion, contributed to by the Government. And, secondly, I will not apologise to this House because I believe that I was doing my duty as an MP in the constitutional role that we have been elected into to give the Government the forum to account to the people, and for that I make no apology.

Grace Fu: I'd just like a clarification. Does Ms Lim not retract her allegation?

Sylvia Lim: I thought I've made it very clear that I'm not retracting.

Grace Fu: So I misunderstood earlier. I thought that Ms Lim has admitted that those were her suspicion and that she would retract it.

But that being the case, I must say that we're deeply disappointed that someone of her experience should accuse the Government of lack of candour even though the facts have been explained to her clearly both in the public domain in statements made by MOF as well as here by Minister of Finance.

Her conduct falls well short of the standards of integrity and honourable conduct we expect of all members. And regrettably to say that it reflects the low standards which the member and her party have set for themselves with regard to commitment to truthful and honest debate in Parliament.

It is expected of us to bring our views forth here but if the facts were wrong and we have said that the facts were wrong - we have not had this plan of floating balloons and then only to retract after public pressure, that's just plainly not existent, it's a figment of imagination- but she continued with this accusation, it's deeply disappointing and deplorable.

Heng Swee Keat: Ms Lim asked earlier that why is it that the Ministry of Finance did not come out to reveal details of the budget. Now the Budget is a serious mater. We take great care in preparing the Budget and the details are kept as secret until the day of the Budget because it has got impact on the market and on not just in Singapore but internationally. So I do think that these are serious matters.

Now Ms Lim claimed to reflect these views of the public. Now that you have opportunity to gather all the facts, now that I and my colleagues have made all the clarifications, I think it is only right and honourable that you withdraw the statement.

Sylvia Lim: Minister for Finance mentioned that Budget preparation is a secret and I think that's actually part of the whole issue. Only the Cabinet knows the truth. And as I've said in my speech earlier, the Government has said it's refuted that it had any intention to raise the GST this year, I do not know the truth, so I can accept that I may have been wrong but I do not accept that my suspicion had no basis and I do not apologise.

Low Thia Khiang: I do take it that Budget is a serious matter and it's always secret because it might affect market movements and all that.

But I think there's nothing wrong for the Government to come up earlier to say that, look, we don't have intention to raise GST at this budget, and that would have cleared the air and the confusion on the ground.

Heng Swee Keat: I think I can accept that in the heat of exchange you may be saying things which you did not intend but now having had so many days to examine the facts, I would like to know that whether Ms Lim accept the explanations that have been given that this has been the intention of the Government, there was no backtracking, that this was the facts as we have put out?

In fact, the issue of raising taxes had been raised many times before that, it's just that the timing and the details are not revealed, and I don't think it is proper for us to talk about the details and timing of it way in advance of a Budget.