SINGAPORE - The arm of an excavator being ferried on a trailer crashed into the overhead pedestrian bridge along Balestier Road, near the Central Expressway on Friday (July 21) night.

The Land Transport Authority said the incident compromised the structural integrity of the bridge, and beams of the damaged structure were removed for safety.

The road was closed while the works were being done, opening to traffic several hours later on Saturday (July 22) morning.

The 57-year-old driver and his 59-year-old employer were later arrested by the police.

Those convicted of damaging road structures or buildings can be fined up to $5,000 and/or jailed up to two years.

Those who are repeat offenders can be fined up to $10,000 and/or jailed for up to five years.

Here is a look at other incidents where bridges were struck by vehicles in Singapore.

Last year, a lorry crane driver was arrested after the crane boom, or lifting arm, of his lorry damaged the overhead bridge linking Marina Square to Millenia Walk.

The incident took place on Feb 22.

It appeared that the lorry driver, 56, had not fully retracted the boom, which scraped the bottom of the bridge while going under it.

Some cladding panels fell onto the road, but the Building & Construction Authority (BCA) said the structural integrity of the bridge had not been affected.

In July 2015, a lorry carrying an excavator hit a bridge along Upper Thomson Road, sending debris falling into the back of the lorry.

An eyewitness told The New Paper that the arm of the excavator "was clearly above the height limit of the bridge, but the driver made no attempt to stop".

The bridge that was struck was the one that links Thomson Plaza and Bright Hill Drive, and the lorry was going along Upper Thomson Road towards Lornie Road.

In October 2011, a man driving a lorry with a retractable crane boom along the Pan-Island Expressway caused an accident when the boom hit the 4.5m-high bridge just after the exit at Paya Lebar Road.

Two parts of the boom fell off on impact and one landed on a car, with a family of three in it. They were taken to hospital.

The driver, Singapore permanent resident Li Qiang - then 40 years old - was in 2014 jailed for a week and banned from driving for nine months.

In July 2010, a lorry carrying a crane crashed into a bridge near Sixth Avenue, punching a hole into part of its walkway.

A woman in her 50s was on the bridge when it was struck by the crane, and she fell, hurting her elbow.

A section of Bukit Timah Road was closed for six hours, and the Land Transport Authority removed the affected portion of the bridge for safety.

In 1997, a rubbish truck, with the driver still at the wheel, dangled for about 15 minutes at an overhead bridge at Clementi Road.

The driver, then 40 years old, struck the bridge outside Ngee Ann Polytechnic as the crane attached to his vehicle was higher than the 4.5-m height limit of the bridge.

He was trapped in the vehicle, tilted at a 45 degree angle, the Singapore Civil Defence Force said.

He was taken to hospital. 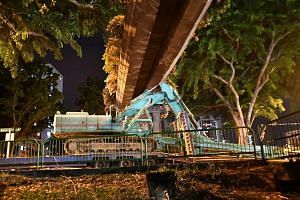 Excavator arm crashes into overhead bridge along Balestier Road: A timeline of what happened

LTA's guidelines on how to prevent such incidents

In a statement in November last year, the LTA said all lorries with cranes must be fitted with an audio warning system from 2017, to reduce the risk of collision with overhead road structures.

Since 2013, there have been 20 cases of overhead road structures being hit by over-height vehicles.

LTA said many of the accidents could have been prevented if drivers had stowed the cranes before setting off.

Here are some of the guidelines.

- Check that the crane fitted on your lorry is adequately retracted.

- Plan and select your route in advance to ensure that your vehicle height does not exceed the height limit of any road structure along the way.

- Stop and seek advice on alternative routes if and when you are diverted from your planned route; are lost or become disorientated; or realise that your route is obstructed by a road structure lower than the height of your vehicle.

If an accident occurs:

- Switch on the hazard lights of the vehicle to warn others.

- Render necessary assistance and call for an ambulance if someone is injured.

- Call 999 and wait at the scene for the police to arrive.