To better rehabilitate former offenders, the Singapore Prison Service (SPS) will look into assigning inmates the same case officer - when possible - from the start of their sentence until they are fully integrated into the community.

This is part of a three-pronged approach announced yesterday by Minister for Home Affairs and Law K. Shanmugam. The other two are: To focus more on correctional programmes targeted at the individual, and to get more family and community support.

Mr Shanmugam unveiled the strategy when he visited the new Selarang Halfway House in Changi, the first such government-run facility here. It plays a crucial role in the national effort. "This has been a key part of our thinking so that they do not come back to the prison," he said in a speech at the facility.

"A lot of things have been done over the years, and this is a further big step in that process. So, we try to make the environment conducive for rehabilitation and reintegration, but still secure."

The correctional programmes SPS is exploring, he said, include using psychology and data to assess the needs of each offender and tailoring them to suit the person.

Also, with digital technology, counselling sessions can be done via video-conferencing, he added.

A mobile app is also being developed for former offenders in the move to achieve "better end-to-end oversight of the inmate's journey through prisons", said Mr Shanmugam. The app will have self-help resources and a job database. 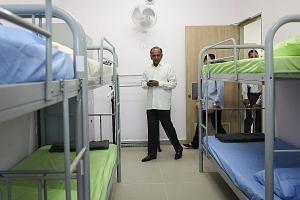 Trying to resist lure of drugs

Community support more crucial than ever

To leverage family support, trained facilitators will guide all newly admitted offenders on how to interact with their loved ones.

The Government also wants to make it a legal requirement for the family of youth drug abusers to attend counselling sessions.

Selarang Halfway House moved to its new site in Upper Changi Road North last November. It will be part of the larger Selarang Park Complex, which will include a Drug Rehabilitation Centre, Work Release Centre and Community Supervision Centre. The complex will be ready next year.

The halfway house has a few firsts to its name, including being the biggest in Singapore.

It has room for more than 570 residents, though it now accommodates 138 former offenders. In the past two years, it was in Cosford Road and housed about 350 residents.

Selarang is also the only one among nine halfway houses here that is for both men and women.

Selarang's deputy executive director Elijah Teo said that by providing a conducive and rehabilitative environment at the halfway house, "we hope to help residents break away from their cycle of reoffending".

Mr Shanmugam also spoke about proposed changes to the Misuse of Drugs Act that will be debated in Parliament next week. If passed, repeat abusers who do not commit other kinds of crimes will be given intensive rehabilitation, not long jail sentences.

He said: "We have studied the evidence very carefully, and we think we can do more on the rehabilitation side and maybe relook at whether we really need long-term imprisonment for these 'pure' drug abusers."

Another proposed change is a longer supervision period post-release, which is now up to two years.

Mr Shanmugam noted that the relapse rate for former drug abusers is "nearly one in two" in the fifth year of release. "So, a longer supervision period - five years - will hopefully help us help them."

A version of this article appeared in the print edition of The Straits Times on January 12, 2019, with the headline 'Ex-offenders to get more help to reintegrate in society'. Subscribe
Topics:
More
Whatsapp Linkedin FB Messenger Telegram Reddit WeChat Pinterest Print Purchase Article Copy permalink