Once, businessman Chris Au seemed part of the jet set.

The entrepreneur from Hong Kong ran trendy restaurants in prime locations here, including Marina Bay Sands (MBS) and by the Marina Bay waterfront.

He was a member of a supercar club and his restaurants were featured in high society magazines.

But in the last three years, Mr Au - a permanent resident here - and his companies have been besieged by lawsuits. His restaurants have also closed one after the other.

Records show that in the last three years, Mr Au has been sued twice by Standard Chartered Bank, and once each by UOB bank and family lawyer Wong Kai Yun.

And most recently, on Aug 12, Iconic Locations - a company where Mr Au was once director and chief executive - issued him a court notice, seeking to pull him into a trademark infringement lawsuit. 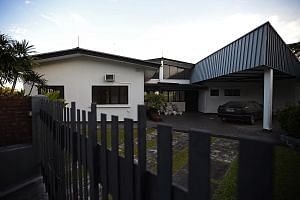 L Capital bought a majority stake in the nightclub in 2014, when it was still called Ku De Ta. A year later, the club changed its name to Ce La Vi after a Court of Appeal ruling.

Then, the court decided after a five-year legal battle that Nine Squares, the company that licensed the trademark and the use of the Ku De Ta name to Iconic Locations, did not own the trademark after all.

That belonged to a popular Bali beach club by the same name that started in 2000. The MBS club opened in 2010.

Now, Iconic Locations is being sued by the partners of Ku De Ta Bali for damages, and the profits it allegedly made from using the Ku De Ta name.

In its notice to Mr Au, Iconic Locations alleges that he had "solely or primarily caused the losses" claimed by the Bali partners.

In their third party notice served on him via Facebook and e-mail, it said Mr Au was then the company's CEO and director, and "represented the sole directing mind and will".

Mr Au had acted in breach of his duties and "solely or primarily caused the losses" alleged by the Bali partners, said the notice.

The company is seeking indemnity from Mr Au or otherwise wants him to contribute to the claims.

In their statement of claim filed with the courts, the Bali partners also said Mr Au knew of their interest in the Ku De Ta trademark as early as 2009.

"Au schemed with (Daniel) Ellaway and another business partner, one Karl Patel, as to how to circumvent the Ku De Ta Partnership's beneficial interest in the trademark," said the statement.

Mr Ellaway was a friend of one of the founding partners of the Bali club.

Mr Au is also locked in another legal battle in Hong Kong with his former business partners over proceeds of $100 million from the sale of Ku De Ta to L Capital in 2014.

Mr Au did not respond to repeated requests for comment.

He is also tangled in a suit with Ms Wong, who is suing him for bankruptcy, after he issued her a $300,000 cheque in March which bounced.

Ms Wong claims the money was allegedly meant to reimburse her for import-related taxes she paid on Mr Au's behalf to bring a Lamborghini Aventador into the country. Mr Au's position is that Ms Wong paid that sum to co-own the car with him.

The case made headlines in June, and Mr Au has hit back at Ms Wong, claiming she has defamed him.

In his counterclaim, he points to an e-mail Ms Wong sent to members of her car club, in which she tells them about the bounced cheque and her intentions to sue, asking for information on his whereabouts.

"It is abundantly clear that the intent of the e-mail, with the disparaging comments and obvious lies, was a malicious act with clear malice to seriously injure the reputation of the defendant (Mr Au)," wrote Mr Au in his counterclaim.

He is also claiming for loss of use of the car, which was allegedly used by Ms Wong for at least six months in 2013.

But in her response filed by her lawyers from Chia Wong LLP on Aug 8 with the courts, Ms Wong denies damaging Mr Au's reputation, on the basis that banks and other creditors have taken up lawsuits against him. She goes on to list a record of legal suits.

For instance, she notes that he was sued by Standard Chartered and UOB bank for close to $400,000.

She adds that Mr Au ran two of his restaurants "to the ground" as their director.

The Spanish restaurant Catalunya, where Mr Au was CEO, is being sued by its landlord Precious Quay for $1.068 million in outstanding rent. The $5 million restaurant closed in June after it opened four years ago to much fanfare at the Fullerton Pavilion.

Company records reveal that Mr Au pulled out as a director of the restaurant in May, just before it closed.

The restaurant's suppliers and cleaning contractor have also taken up lawsuits against it. Law firm Rajah and Tann is also suing it for outstanding legal fees.

Another of Mr Au's MBS restaurants, the bistro Au Chocolat, was also sued by its landlord and suppliers. It closed in 2014.

Asked about the spate of lawsuits he is facing, Mr Au again declined to comment.