When asked what he would have done if he had seen Corporal Kok Yuen Chin being carried to the pump well on May 13 last year, former Tuas View Fire Station commander Huang Weikang said he would have put a stop to it.

Similarly, when shown a video of the cake-cutting ceremony that preceded Cpl Kok's death and asked how he would have responded if he had heard the word "kolam" during the celebration, Major Huang, who was not on duty then, said he would have been on the alert.

"There could be a possibility they might do it to Kok," said Maj Huang, who understood "kolam" in the context of ragging to mean that someone would end up in a pump well.

He was testifying yesterday on the fourth day of the trial, in which the Singapore Civil Defence Force officers in charge of Tuas View Fire Station on the night that Cpl Kok, 22, drowned are contesting charges against them.

Yesterday, Deputy Public Prosecutor Kumaresan Gohulabalan showed Maj Huang video clips taken from the station's security cameras, where one showed officers carrying the full-time national serviceman towards the well and another showed the group gathered around it.

"With what was said (during the celebration) about the kolam, then carrying Kok towards the pump well... you have to definitely stop it," said the now senior fire investigator who was station commander up till December last year.

He said he would have "put the actions" together and realised it was "likely" that Cpl Kok would end up in the pump well. 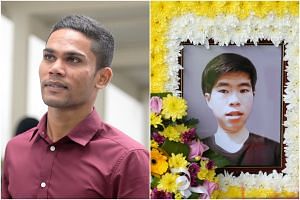 When asked how he would have stopped the men, Maj Huang said that as a superior, "your words are command", and he believed the men would have listened to the order.

On the night of May 13 last year, Cpl Kok was pushed into the pump well as part of activities to mark the completion of his national service, and he later drowned.

Chong and Nazhan were each charged with aiding a rash act that caused grievous hurt by illegal omission. They had allegedly failed to prevent a group of officers from making Cpl Kok enter the pump well, thereby endangering his life.

In one of the videos where the officers are seen gathered around the well, a person identified as Nazhan stands with the group and leaves the scene shortly after.

When asked by the prosecution if he would have left the scene in such a situation, Maj Huang said he would not have done so.

That night, he was at home when he got a call at around 9pm from Chong saying that Cpl Kok had fallen into the pump well and they could not find his body. Maj Huang alerted his division commander and, upon reaching the station, saw para-medics administering cardiopulmonary resuscitation to Cpl Kok.

During cross-examination, Chong's lawyer Wee Pan Lee suggested that the pump well area was dimly lit and his client, who was in the control room, was unable to see what was going on at the well.

Maj Huang said: "There is the possibility because at night, the area is not as illuminated. In a quick glance he might not be able to make out who is there."

However, he said that if the word "kolam" had been mentioned more than once and if he had seen a crowd at the pump well, it would have been an "uncomfortable situation", and he would have gone over to assuage "any doubts".

A version of this article appeared in the print edition of The Straits Times on June 14, 2019, with the headline 'Ex-fire station chief says he would have acted if he knew'. Subscribe
Topics:
More
Whatsapp Linkedin FB Messenger Telegram Reddit WeChat Pinterest Print Purchase Article Copy permalink