Former Chief Justice Chan Sek Keong has weighed in on a controversial law that criminalises sex between two homosexual or bisexual men.

He argued that Section 377A of the Penal Code may have to be read in a way that it applies to all persons, not just men, who commit acts of gross indecency in public.

He suggested that the existing provision fails the reasonableness test as set out in a 2015 case and, therefore, violates Article 12(1) of the Constitution.

His remarks, published in an article in the latest issue of the Singapore Academy of Law Journal titled "Equal Justice Under The Constitution And Section 377A Of The Penal Code, The Roads Not Taken", were based on a talk he gave in February at the National University of Singapore law faculty's Centre for Asian Legal Studies.

Mr Chan's 72-page analysis of S377A, based on past cases and its history, comes at a time when there have been renewed challenges calling for its review.

The Court of Appeal said S377A was constitutional in 2015, when it dismissed the appeals in two cases that challenged it.

Class(a) males are treated unequally under S377A since Class(b) males and Class(c) females commit no such offence when they commit similar acts, noted Mr Chan. 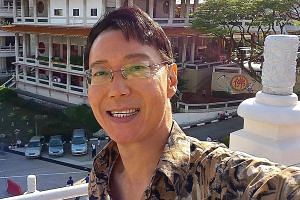 3 cases challenging Section 377A to be heard next month

Section 377A should not be repealed under the present circumstances: Archbishop William Goh

Given such unequal treatment of Class(a) males, the question is whether S377A violates the fundamental rights of all persons to equality before the law and protection under the law based on Article 12(1).

Mr Chan pointed out that S377A was enacted in 1938 to deal with male prostitution and associated activities linked with male homosexual conduct that was rife then and not because such conduct was unacceptable in Singapore society then.

Mr Chan explained that S377A's purpose in 1938 was no longer valid in 2007 when Parliament reviewed and decided not to repeal it, or in 2013 when the High Court considered the case of Mr Lim Meng Suang.

Since the purpose ceased to exist, S377A ceased to satisfy the reasonable classification test requirements and, therefore, "violates Article 12(1)".

He said if S377A were to be held unconstitutional in 2013 for violating Article 12(1), "then S377A, in covering only non-penetrative sex between males, may have to be read in such a way that it applies to all persons who commit acts of indecency in public".

In his analysis, the former Chief Justice said that preserving public morality or decency would still be a valid purpose of S377A in 2007, 2013 or today.

But this could be achieved by modifying, adapting or qualifying the words or text of S377A to conform to Art 12(1), as mandated by Article 162.

"If the purpose of S377A has ceased to exist in 2007 or 2013, S377A may be construed to conform to the Constitution by reading it as a gender-neutral provision that criminalises non-penetrative sex of gross indecency committed in public," he said.

Mr Chan also made it clear that "whether or not a written law violates the Constitution is within the exclusive purview of the courts to decide under the separation of powers".

The Ministries of Law and Home Affairs said in a joint reply to The Straits Times last night that they are aware of Mr Chan's article on S377A.

"As there are challenges to the constitutionality of S377A before the courts, it would be inappropriate to comment on Mr Chan’s analysis at this juncture," the ministries said.

A version of this article appeared in the print edition of The Straits Times on October 17, 2019, with the headline 'Ex-CJ: 377A's original aim outdated, so reading of law may have to change'. Subscribe
Topics:
More
Whatsapp Linkedin FB Messenger Telegram Reddit WeChat Pinterest Print Purchase Article Copy permalink