SINGAPORE - Law and Home Affairs Minister K. Shanmugam made clear on Friday (Sept 13) that satire is not covered by a new law to tackle online falsehoods.

"The suggestion that satire is covered by Pofma is erroneous," he said, referring to the Protection from Online Falsehoods and Manipulation Act passed in May.

The minister was responding to questions from reporters on a recent Facebook post by the Media Literacy Council (MLC), which sparked an online debate for highlighting satire as one type of fake news.

"Only false statements which objectively would be seen as statements of fact, can be caught under Pofma," he said, adding that he has been clear on the point about satire both in and out of Parliament.

There were more than 250 comments left on the post as of 5pm on Sunday, most criticising the MLC and pointing out that satire was not covered by Pofma.

On the MLC, Mr Shanmugam said the council was made up of good people who "were trying to help in a variety of issues". 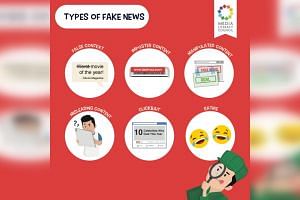 Five questions you may have about the new 'fake news' law

No ban on things just because some people find them offensive: Shanmugam

"I can understand what the MLC was trying to say. But either they made a mistake, or it didn't get said accurately... That is unfortunately not an accurate representation of Pofma," he said during a visit to the area around Yishun Integrated Transport Hub, which had seen traffic snarls on Monday caused by public buses waiting to turn into the interchange.

The MLC, whose members are appointed by the Minister for Communications and Information, apologised on Sunday.

It acknowledged its post and infographic gave the wrong impression that satire was fake news, which it said was not its intent.

Under Pofma, ministers, advised by other officials, will get to decide whether something is a falsehood and assess its impact on public interest.

Once a judgment is made, they will work with the Pofma Office within the Infocomm Media Development Authority on the action to be taken.

This could include an order to run a correction alongside the falsehood, to take it down, or to block certain accounts and sites that are spreading the falsehood.

Mr Shanmugam also spoke to reporters on the traffic congestion that ensued outside the Yishun transport hub on Monday. Long lines of buses in the area had caused jams during the morning and evening rush hour.

He said  jams like these happen when such hubs open because people are unfamiliar with the changes.

“But it’s been sorted out very quickly, by Tuesday it was sorted out. LTA (the Land Transport Authority) and SMRT have been extremely proactive,” said Mr Shanmugam, who is an MP for Nee Soon GRC. The hub is located within the constituency.

The test will come next Monday when schools re-open, Mr Shanmugam noted, adding he was sure LTA and SMRT would sort out issues should they arise.