His wife, former nurse Shamla Subaraj, posted about his death on Facebook on Tuesday afternoon, sparking an outpouring of grief from the public and nature community.

Mr Lee paid tribute to the nature pioneer in a Facebook post, saying that for over 35 years, Mr Subaraj had worked tirelessly towards the conservation of Singapore's natural heritage.

"If you happened to bump into Subaraj in the forest, where he was often found, he would point out a bird that was hidden from view from everyone else except him," said Mr Lee. "That was his magic, his intimate understanding and his beautiful connection with nature. With his passing, we will greatly miss that magic."

He said: "Uncle Sub was a mentor, friend, and an inspiration. He made a big impact on how I see conservation work and environmental advocacy. Walking through the forests with him was like walking with one of the trees. Thank you Uncle Sub. We will miss you deeply."

Mr Subaraj leaves behind his wife and two sons - Serin and Saker - whom he named after two bird species.

The Straits Times understands that members of the nature community plan to turn up in green for his final send-off on Wednesday.

In an interview with The Straits Times in September, Mr Subaraj had said he considered it his duty to speak up for nature.

In his younger days, he had walked away from completing his degree in zoology after a teacher had asked him to dissect a live frog, he told The Straits Times then.

More recently, he had refused to sign a non-disclosure agreement with the developer of the Mandai nature precinct, following a spate of roadkill incidents along Mandai Lake Road after works started. 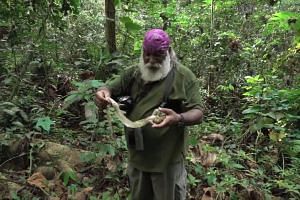 The Life Interview With Subaraj Rajathurai: Self-taught naturalist stumbled upon his calling

National University of Singapore biology lecturer N. Sivasothi said Mr Subaraj had voluminous knowledge about nature - knowledge that he used in the perpetual struggle between development and conservation.

"He was always available to talk to people, whether it's a school group or public education event," said Mr Sivasothi. "I enjoyed going for nature events because I knew he would be there. He would always welcome you with his broad smile and bandana, and ask how you are. And then, we would talk about things that had to be done."