More than 700 animals from across 131 species were born at the four parks under Wildlife Reserves Singapore (WRS) last year.

Among the newborns were 35 species listed as threatened under the International Union for Conservation of Nature Red List.

The standout success is the breeding of the endangered Santa Cruz ground-dove at Jurong Bird Park, with 12 chicks born since late December, WRS said.

Other notable newborns include a chimpanzee, a Celebes crested macaque, a pair of sloth bears and Malayan horned frogs.

"The world-first breeding of a Santa Cruz ground-dove in human care is a significant step in establishing an assurance population of this species away from their natural home." An assurance population refers to a colony of a species bred under human care and ensures that the species does not go completely extinct even if it were to die out in the wild.

About 300 of the doves, which are native to the Solomon Islands, are estimated to exist in the wild. 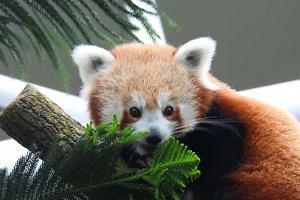 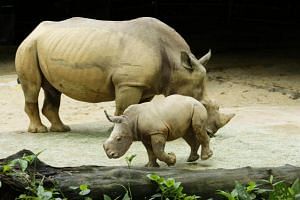 In Pictures: Baby animals born in Singapore wildlife parks in 2017

The first chick at the Bird Park hatched on Dec 31. More chicks could be on the way as more eggs are incubated, in what is "a significant win" for the species, WRS said.

Jurong Bird Park also successfully bred three "critically endangered" straw-headed bulbuls last year, after hatching one in 2017. The songbird is threatened by poaching and Singapore is the last stronghold of the species, with a local wild population of over 200.

Meanwhile, Singapore Zoo had a prolific year in breeding amphibians, WRS said. In a first for the zoo, five tadpoles of the Malayan horned frog successfully reached froglet stage - the stage before becoming an adult frog.

Two have survived and grown into juveniles.

It also recorded its first birth of a Celebes crested macaque, Agung, in seven years. The "critically endangered" species is threatened by habitat loss and natives hunting for bush meat.

At the Night Safari, zookeepers successfully brought up a pair of sloth bearcub twins, after hand-raising them in order to maximise their chances of survival.

Born last September to an inexperienced mother, Shreya and Zara needed constant care in their first few weeks. They are now being prepared for their public debut.

At the River Safari, a giant anteater, Leona, was born last year for the first time in four years.

Dr Cheng said the main goal of breeding wildlife at the WRS parks is to achieve sustainable populations of species in human care.

"Depending on the species and circumstances, these animals can be ambassadors for community engagement and education, and they may also serve as assurance colonies to safeguard against their extinction in the wild.

"The ultimate goal would be to return some of these zoo-born progenies to their wild habitats some day, when it is safe to do so," he said.