The haze is back, and the National Environment Agency's (NEA) air quality monitoring network is in full gear.

As air pollution descended on Singapore over the past week, many have questioned whether the figures on the NEA's website have downplayed the severity of the haze.

Instead of relying on readings provided by the NEA, some turned to other air quality readings, such as the World Air Quality Index (AQI), which is compiled by a non-profit outfit headquartered in Beijing and uses measurements provided by affected countries.

The AQI is published online at aqicn.org

During hazy episodes over the past week, people have pointed out that while the AQI reflected unhealthy levels, the NEA's 24-hour PSI showed "moderate" air quality.

The differences in the two readings, the NEA told The Straits Times yesterday, boil down to the way the readings are calculated.

"There are no international guidelines on how air quality indices should be computed," said an NEA spokesman. "Different countries and organisations have their own indices for air quality."

Forecasts for the 24-hour PSI should be relied on when planning future activities, such as whether one should go for a picnic the next day.

The one-hour PM2.5, on the other hand, is meant as a gauge for immediate activities, such as whether going for a jog now is the best option.

The readings hinge on the time period over which pollutants are measured.

The 24-hour PSI measures the average concentration levels of six component pollutants over the given period. These include PM10 and PM2.5 - particulate matter of different sizes - sulphur dioxide, nitrogen dioxide, ozone and carbon monoxide. As it is an average over 24 hours, the reading could remain low even if the air currently appears milky. 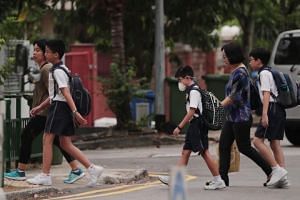 230 arrested in Indonesia on suspicion of starting forest fires

The one-hour PM2.5 reading, however, measures the average hourly concentration of only one of the six pollutants - PM2.5, tiny particles 30 times smaller than the diameter of a strand of human hair, small enough to be breathed deep into the lungs.

As PM2.5 is the dominant pollutant during periods of trans-boundary haze and has the most influence over the 24-hour PSI readings, it provides a good indication of the current air quality, said the NEA.

However, as Singapore has experienced over the past week, weather conditions can be fickle.

Changing wind patterns, for instance, can make skies hazy one moment and clear the next, which was what happened at the weekend.

After air quality hit unhealthy levels last Saturday, Singapore enjoyed a brief reprieve from the pollution from the fires in Sumatra on Sunday, when southerly winds switched to blowing from the south-east instead.

As a result, the one-hour PM2.5 concentration levels can fluctuate over the course of a day, the NEA noted.

This volatility is accounted for in the 24-hour PSI reading as it measures the average concentrations of pollutants over 24 hours.

In calculating Singapore's 24-hour PSI, the NEA uses data from a network of air monitoring sensors islandwide. These measure concentration levels of the six pollutant particles that Singapore uses to calculate its PSI. 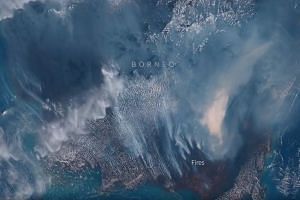 For each pollutant, a sub-index is calculated on a scale from zero to 500 based on concentration levels. The 24-hour PSI is the average of the highest sub-indices in each of the past 24 hours.

The site also uses the latest particulate matter data instead of the 24-hour average.

The EPA calculates its AQI from five major air pollutants regulated by the US government's Clean Air Act. These are ozone, particle pollution, carbon monoxide, sulphur dioxide and nitrogen dioxide.

Similar to the PSI, the AQI is tabulated by first converting raw measurements into a separate AQI value for each pollutant.

The highest of these AQI values is then reported as the AQI value for that day, the EPA said.

The NEA said the aqicn.org website relies on the PM2.5 concentration data that is posted every hour by the NEA.

However, it added that aqicn.org does not follow Singapore's system of computing PSI.

This difference in methodologies is why the final PSI or AQI readings can be different.

A version of this article appeared in the print edition of The Straits Times on September 20, 2019, with the headline 'Why air quality measurements in S'pore differ from other indexes'. Subscribe
Topics:
More
Whatsapp Linkedin FB Messenger Telegram Reddit WeChat Pinterest Print Purchase Article Copy permalink