SINGAPORE - Warning signs have been put up at Changi Beach Park after a reported sighting of a crocodile in the area.

The Straits Times understands that the signs have been put up since Monday (Aug 21).

He subsequently contacted the National Parks Board (NParks) and Agri-Food and Veterinary Authority.

Mr Yusaini spotted the reptile again on Wednesday and posted several photos and videos of it on Facebook.

His Facebook post, which came with a warning to people not to swim at the beach, has since received over 7,000 shares.

"My immediate priority was to warn the public to stay away as it can be quite dangerous," Mr Yusaini told ST.

He suggested that the crocodile could be the same one that was spotted at Pasir Ris Park earlier this month. 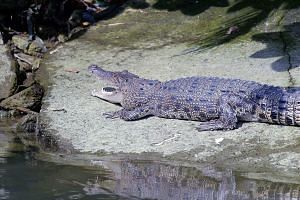 Sightings of crocodiles, while not uncommon in places such as Sungei Buloh Wetland Reserve in north-western Singapore, are much rarer in the north-eastern region.

NParks, in response to the Pasir Ris sightings, had said it is monitoring the situation and will take steps to remove the crocodile should it venture into publicly accessible areas.

It also advised people who come across a crocodile to stay calm and back away slowly. They should not approach, provoke or feed the animal, and can call the NParks helpline on 1800-471-7300 for assistance.

Mr Chia Seng Jiang, group director of parks at NParks, told ST that the board is aware of recent sightings of a crocodile in the waters around Changi Beach Park.

"On Aug 21 2017, a crocodile was sighted in the waters off the beach area of the park," he said. "It was likely an Estuarine Crocodile (Crocodylus porosus)."

Estuarine crocodiles are known to swim freely in the Straits of Johor. They feed and rest in mangroves and freshwater bodies, and are usually found in the water or at mudflats away from visitor routes.

Mr Chia said NParks is working with the Agri-Food & Veterinary Authority of Singapore (AVA) and Animal Concerns Research and Education Society (ACRES) to monitor the sightings of the crocodile, as well as to catch and move it to another location, for the safety of park users.

"NParks and AVA have also advised vessel owners, fish farmers, and operators of establishments along the coast to take the necessary precautions," he said.

Warning signs and advisory notices have been put up in the park near water edges.

"Visitors should heed these signs, in particular to keep to designated paths and away from water edges," said Mr Chia.