SINGAPORE - Ecologist Mark Wong was looking for ants in a Singapore forest when he flipped a log over and saw what he thought was a "piece of fungus".

However, this "fungus" then "started moving slowly", Mr Wong told the National Geographic.

It turned out to be a prehistoric-looking female trilobite beetle, a very rarely seen species.

Mr Wong's video of the beetle crawling in the forest was first uploaded onto the Entomological Network of Singapore's Facebook page on Sept 12. It was then featured on the National Geographic Facebook page on Sunday (Nov 13), receiving 4.9 million views by Monday morning.

The mysterious beetles are known for being extremely hard to find - a mating pair have only been sighted twice in 1925 and in 1993 since they were discovered in the 1800s. The male beetles are even harder to spot as they are about a tenth of the female's size and do not resemble the females at all. 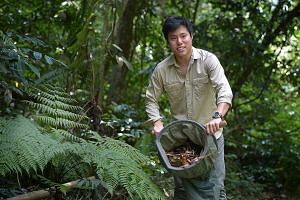 This is because the females retain their larval form throughout life, explaining their shell-like appearance as seen by Mr Wong. There is still little information on whether the males look different from females from birth and what the beetles eat.

Trilobite beetles, which date from around 47 million years ago, are named after trilobites - armoured sea creatures commonly seen in fossils. Trilobites went extinct about 200 million years before the beetles existed.

There are purple, green and black trilobite beetles. An unusual feature is their ability to retract their heads like tortoises.

Mr Wong, 26, who has a National Geographic Young Explorer grant, grew up wanting to be like "entomologist and bug-catching extraordinaire" Georges Brossard. He received an undergraduate overseas scholarship from the National Parks Board Singapore in 2011 and graduated from The Australian National University in 2014. He is currently working as a manager at the National Parks Board, according to his Linkedin profile.

"Inspired by his (Mr Brossard) creepy crawly adventures, much of my childhood in Singapore was spent searching under rocks for scolopendromorph centipedes and trying my hand at 'fishing' out the little native tarantulas from their silken burrows," he told National Geographic in an interview.

Mr Sean Yap, a representative for the Entomological Network of Singapore, which "champions the study and appreciation of insects in Singapore and wider South-east Asia", said the find was "as encouraging as it is exciting".

"Finding even one is an encouraging sign that the species is still around and reproducing in our local forests," said Mr Yap.

"Because the females remain larviform even in adulthood and lack wings, this species is particularly sensitive to disturbance. Unlike other beetle species, the females can't just take flight to find another patch of forest if her current habitat is degraded," he added.

"Nevertheless, its presence indicates that in spite of rapid development, Singapore's forests are still relatively rich in biodiversity. However, the decreased number of sightings is also a reminder what we should take care of how we manage our remaining natural areas."