SINGAPORE - One of Singapore's oldest water treatment plants has been upgraded with state-of-the-art technology, in a move that will boost the Republic's water resilience in the face of climate change.

The upgraded Choa Chu Kang Waterworks, which is also more energy- and cost- efficient now, was officially opened by Minister for the Environment and Water Resources Masagos Zulkifli on Thursday morning (Aug 29).

The Choa Chu Kang plant treats water from Kranji, Pandan and Tengeh reservoirs before it is delivered to taps in homes, businesses and industry.

Climate change may cause the quality of water in Singapore's reservoirs to deteriorate, said Mr Masagos during the event.

He pointed to how rising temperatures could result in warmer waters, while intense rainfall could lead to an excessive amount of nutrient runoff being washed into waterways and reservoirs.

"These conditions are likely to fuel algae growth in the reservoirs, which will need to be removed as part of the water treatment process," said Mr Masagos.

In anticipation of such challenges, national water agency PUB has to continuously invest in new water treatment technologies and upgrade our water treatment plants, as was done in Choa Chu Kang, he added. 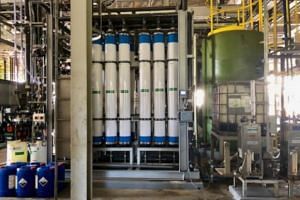 Smart water meters to be rolled out to 300,000 properties here to help save water

"This will allow Singapore to be more secure in providing safe and reliable water to its citizens," he added.

In the $162 million project spanning three years, the old sand filtration system at the plant in the west has been replaced with ceramic filtration membranes, which are more efficient at removing suspended particles from raw water.

As part of the upgrade, ozone-biological activated carbon filters were also added to the water treatment process.

This additional step in the water treatment process further helps to destroy microbes and remove organic matter from the water, said PUB.

Similar ceramic membrane systems are also used at water treatment facilities in the Netherlands and Britain, although it is the first for Singapore.

PUB chief executive Ng Joo Hee said the upgraded plant allowed the water agency to carry out advanced treatment of the tap water that is supplied to homes, commerce and industry.

He added: "That we are able to deploy this new technology on such a large scale is the result of years of research, experimentation and rigorous testing."

Choa Chu Kang Waterworks was built in two phases in 1975 and 1981 respectively, with two facilities to treat 40 million gallons per day (mgd) (181 million litres per day) of water each.

In total, the 80 mgd (362 million litres per day) of water that the plant can process is equivalent to about 145 Olympic-sized swimming pools.

In 2008, the first 40 mgd per day facility was upgraded, with polymeric membranes replacing sand filters.

In 2016, work to replace the sand filtration system with ceramic membranes started on the second facility. This was completed in June 2019.

NTU's Prof Snyder said ceramic membranes have numerous advantages over sand filtration systems, in terms of strength and larger filtration capacity, among others.

But most importantly, it was also safer, he said.

Ceramic membranes have uniform pore size that sand filtration systems do not, he said. This, coupled with high material stability, make them an ideal technology for pathogen removal, the most paramount aspect of water safety, said Prof Snyder, who conducts research into ceramic membrane technology.

"Ceramic membranes can be combined with oxidation technologies, such as ozonation, whereby the membrane and ozone together create a barrier that can eliminate most water contaminants, both biological and chemical," he added. "Ceramic membranes will produce a safer and higher quality water than traditional sand filtration systems."

Ceramic membranes can last about 20 years, four times longer than the five-year lifespan of polymeric membranes.

Water loss is also reduced significantly from 5 per cent to 1 per cent with the use of ceramic membranes, the agency added.

Water is an existential issue for Singapore, Mr Masagos said on Thursday.

He said: "Climate change has made water an issue every country will have to grapple with in the near future.

To further boost Singapore's water resilience even as climate change is causing rainfall patterns to change, PUB is also looking to weather-proof Singapore's water supply by treating used water and by desalination.