SINGAPORE - Gardens by the Bay is one step closer towards going zero waste by adopting technology that converts trash to energy and a carbon-based product which may enhance plant growth.

Energy provider SP Group has created a 6m-long enclosed system that will turn food waste, plastic and general waste into thermal energy at 650 deg C. The thermal energy is used to heat a large tank of water, which is used by the food and beverage outlets in the Gardens.

As a by-product of the chemical reaction, 5 per cent of the waste's volume becomes biochar - carbon-based chips that resemble charcoal. The biochar will be used in the Gardens' research to find out if it helps to improve plant growth and health.

Since the waste is not incinerated and some carbon is locked in the biochar, the system reduces the carbon footprint by up to 20 per cent, compared against incineration.

On Thursday (June 6), SP and the Gardens, with the support of Singapore investment company Temasek, signed an agreement at the Ecosperity Conference 2019  to put the system on a two-year trial. The signing was witnessed by Minister for the Environment and Water Resources Masagos Zulkifli.

The conference brought together global corporate leaders, innovators and experts to discuss how business growth can thrive in a sustainable manner.

A circular economy minimises waste by using resources for the longest time possible, regenerating and recycling products and materials in a closed production loop. This is different from the traditional linear economy where products are made, used and disposed.

SP's system, which began operating last month and will run as a pilot project until May 2021, will help to reduce the country's reliance on the Pulau Semakau landfill, which is expected to be filled by 2035, and instead help boost a circular economy.

All of the chemical reactions and equipment are contained in a compact system into which a large trash bag containing food waste, plastic, cardboard and wood chips is loaded.

Since the technology can handle almost all waste except bulky items and metals, minimal sorting is needed. 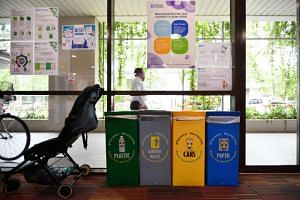 A bit of piped town gas is needed to kick start the chemical reaction, known as gasification. As the reaction generates heat, the waste is converted into synthetic gas, or syngas, which contains primarily carbon monoxide and hydrogen.

The syngas then undergoes combustion to produce heat or thermal energy. The entire process, which takes between 10 and 15 minutes, is self-sustaining.

The thermal energy heats a 2,000-litre water tank and the hot water is sent to the Gardens' F&B outlets for their consumption and washing uses. Previously, electricity was used to heat water.

Mr Thomas Seow,  Gardens by the Bay's senior director of research and horticulture, said:."The Gardens is an ideal location for the pilot because it has a (variety) of waste that can be tested through the gasification system to find outcomes and data.

"Hot water and biochar can be used here and need not be transferred out of the Gardens. The products can be recirculated within the area."

This is not the first time gasification is being used in Singapore. Earlier this week, the Nanyang Technological University launched a bigger gasification system to convert solid waste generated on campus, which runs at a higher temperature and can break down metals and bulky materials. 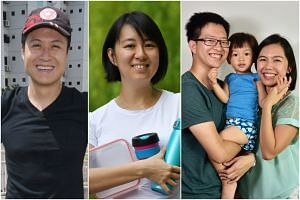 SP's system can handle up to one tonne of waste every 24 hours, but the trial will have it running eight hours a day, converting about 300kg of waste each day. Between four and five tonnes of waste is collected at the Gardens every day.

If SP and the Gardens decide to expand the project after the two-year trial, more containers may be deployed or bigger ones built, said SP's Singapore district cooling chief executive officer Jimmy Khoo.

"Beyond the Gardens, we think the system can be deployed in places such as hotels and hospitals where they have waste and big needs for hot water for sanitation," added Mr Khoo.

The project between SP and the Gardens is part of the National Environment Agency's (NEA) regulatory sandbox project that was announced at CESS 2018. The regulatory sandbox allows interested parties to trial new environmental services-related technologies and solutions in a controlled environment within a certain time period.

In the other project approved by the NEA, a digital platform was created for logistic companies to efficiently pick up used cooking oil from F&B outlets and recycle the oil properly/

Correction note: In an earlier version of the story, we said that the agreement between SP Group and Gardens by the Bay was signed at the CleanEnviro Summit Singapore (CESS) Catalyst 2019 . This is incorrect. The agreement was signed at the Ecosperity Conference 2019 We are sorry for the error.

Correction note: In an earlier version of the story, we said that Temasek Holdings supported the trial project. This is incorrect. It should be Singapore investment company Temasek. We are sorry for the error.