SINGAPORE - More than 1,600 premises - including food and beverage establishments, hotels, schools and supermarkets - will be encouraging the community to reduce the use of disposables such as plastic bags and takeaway containers over the next three months.

They come under 59 organisations that have joined a nationwide National Environment Agency campaign to get the public to choose reusable options.

Senior Minister of State for the Environment and Water Resources Amy Khor launched the Say Yes to Waste Less campaign at Ikea Tampines on Saturday (June 8).

"Our collective efforts to conserve our resources today will pave the way towards a sustainable environment for future generations," she said.

The campaign, which is in line with Singapore's Year Towards Zero Waste this year, aims to raise awareness of the need to reduce waste.

Last year, about 164,500 tonnes of domestic waste in Singapore was made up of disposables - enough to fill about 300 Olympic-size swimming pools. 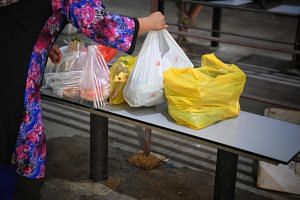 Hotels cut down on single-use plastics like straws and cutlery

Dr Khor urged the public to "avoid all kinds of disposables as much as we can".

She added that people may have started using paper-based disposables, such as paper bags and cups, or oxo-degradable options, as they perceive these to be eco-friendly alternatives to plastic-based disposables. "However, the fact is that the production and disposal of all materials have some degree of impact on the environment," she explained.

Some partners have already started their own initiatives, such as having cashiers prompt customers to consider using reusable bags and providing incentives to customers who bring reusable containers and bottles.

Among them is Nanyang Girls' High School, which partnered bubble tea chain Kung Fu Tea in Hillion Mall this year to implement a discount of 10 cents for customers who bring their own cup. The school intends to extend its efforts to other outlets and retailers.

Mr Benny Koh, the teacher in charge of environmental education at the school, said students contribute by designing publicity materials such as posters to urge customers to bring their own cups and bottles, which in turn cuts down the use of plastics.

Hotels under the Accor Group have also come up with their own initiatives to encourage guests to waste less. These include replacing single-use amenity bottles with multi-use dispensers for bathroom amenities in guest rooms.

Ms Gaynor Reid, vice-president for communications and corporate social responsibility, Asia Pacific, at AccorHotels, said its efforts go towards helping guests understand the importance of protecting the environment. "When people understand the reasons behind it, they get on board."

Earlier this month, it was reported that more than 270 food and beverage outlets will stop providing plastic straws from July 1, in a major step to reduce plastic waste in the local F&B sector.

The outlets will provide straws to customers only on request or for specific medical reasons, the World Wide Fund for Nature (WWF) said. The move is part of a voluntary WWF initiative called Plastic Action (Pact), where businesses commit to reduce the amount of unnecessary plastics used.