Earth is a water world, but more is known about the Moon than the depths of our oceans.

In 2018, however, parts of the Indian Ocean gave up some of its secrets to scientists from Indonesia and the National University of Singapore (NUS) on a deep sea expedition cruise off the southern coast of West Java province, Indonesia.

At the start of this year, the scientists began telling the world about what they uncovered, with the publication of a slew of scientific papers describing the strange creatures dredged up from the seabed, 200m to 2,100m beneath the surface of the ocean.

One creature, in particular, captured the world's attention - the Darth Vader isopod, a giant deep sea cockroach so named for its resemblance to the Star Wars villain when viewed head-on. At more than 30cm long, it was exceptionally large for an isopod, as most are usually just a few centimetres long.

Mr Muhammad Dzaki Safaruan, a specialist associate from Singapore's Lee Kong Chian Natural History Museum and an expedition crew member, told The Straits Times about the time when the creature was first hauled on board.

"It was clinging on the net, and we were all excited because it was one of the bigger specimens encountered so far."

Bathynomus raksasa also turned out to be a species new to science.

The scientists on the South Java Deep Sea Biodiversity Expedition collected more than 12,000 creatures during their 14-day voyage.

Scientists are still combing through the specimens, but finding researchers with the right expertise to study the organisms and having the time to accurately analyse the specimens could take years.

So far, papers describing 10 other species of crabs, prawns, lobsters, sea stars and fish have been published, with more to come.

To the land-bound, the animals of the deep sea may look strange. International headlines had called the giant deep sea cockroach the "stuff of nightmares". But the creatures' unconventional physical attributes are what help them adapt to life in the deep - a hostile environment that is cold and dark and where food is scarce. Organisms also have to deal with the crushing weight of the body of water above them.

Sunlight cannot penetrate more than the first 200m of the sea, so there are no plants or phytoplankton at depth, reducing the number of herbivorous marine organisms that are prey for many others.

Most organisms of the deep are black, white or translucent, helping them blend into the darkness. Occasional pops of colour are red. Sunlight comprises a full spectrum of colour, but because red light has the longest wavelength and is absorbed by surface waters, it does not reach the deep. Hence many deep sea animals cannot see red, said Professor Peter Ng of Lee Kong Chian Natural History Museum.

With more fishing and mining companies setting sights on resources on the seabed - whether for manganese nodules or oil and gas - it is important to know about life underwater so that they can be protected should there be any development work underwater. "But there's a bigger purpose here," said Prof Ng. "We need to know why they're there, and to ensure that they survive, even if there is no oil and gas to be mined."

But the deeper oceans are richer in other forms of nutrition. For example, marine snow - the sinking organic matter from dead organisms.

Organisms like the giant deep sea cockroach have learnt to capitalise on this resource in the deep. The creature earned its name from its scavenging habits, even though it is more closely related to crabs and shrimps.

"That said, many deep sea animals are also known to go without food for months or years at a time," said Professor Peter Ng, head of the natural history museum and co-lead of the expedition.

The (largely) monochromatic life underwater is another adaptation, he said. Since sunlight does not reach the depths of the ocean, there is hardly any need for colour - which land animals use for protection from the sun, camouflage or as a signal to others of their kind, he explained.

Most organisms of the deep are black, white or translucent, helping them blend into the darkness.

Occasional pops of colour are red.

Sunlight comprises a full spectrum of colour, but because red light has the longest wavelength and is absorbed by surface waters, it does not reach the deep. Hence many deep sea animals cannot see red, said Prof Ng.

"Crustaceans have a naturally occurring pigment that makes them red, although they sometimes make other proteins to make them appear other colours," he said.

"But for some deep water crustaceans, staying red confers them a benefit of camouflage, and this means they don't have to spend extra energy making other colours."

Prof Ng co-led the expedition with Professor Dwi Listyo Rahayu, senior research scientist at the Indonesian Institute of Sciences' Research Centre for Oceanography. They led an expedition team of 31 researchers and support staff. 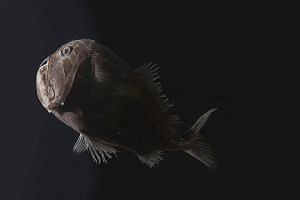 How ultra-black fish disappear in the deepest seas

The richness of life in the deep seas may surprise some.

In the 1800s, it was thought that because of the hostile environments underwater, the abundance and variety of marine life would decrease with increasing depth, the seabed being lifeless.

But in a video call with The Straits Times last week, the two lead scientists said their experience with other expeditions showed there are many "cool things" to be found deep underwater.

Prof Ng said: "We were more worried that we would screw up, the nets would turn upside down, and everything would be ripped up. So that was the bigger worry - that we could not get the equipment working in the proper way."

Prof Rahayu agreed, pointing to the choppy conditions of the sea and the unpredictability of the terrain underwater. "Many nets were damaged and torn, and in the last few days of our trip, we were down to our last net," she said. 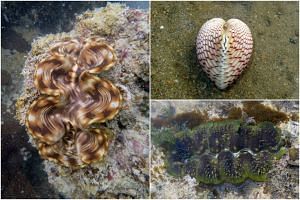 Box jellyfish sighting in Singapore: Facts about the beauty with a sting

Prof Ng said that with more fishing and mining companies setting sights on resources on the seabed - whether for manganese nodules or oil and gas - it is important to know about life underwater so that they can be protected should there be any development work underwater.

"But there's a bigger purpose here," he said. "We need to know why they're there, and to ensure that they survive, even if there is no oil and gas to be mined."

He cited the example of the deep sea cockroach and how it went viral on the Internet. "Is there any economic value? Absolutely none. So how do you explain why it becomes viral? Because it's a cool animal.

"It shows that generally, people are interested in animals as a group, and once we tell them such an animal exists, people get excited. And of course, then you can start planning how to conserve it."

Adapting to life in the deep