Thousands of sterile male mosquitoes were released in Nee Soon East early yesterday morning as part of a National Environment Agency (NEA) study that is looking at reducing the incidence of dengue and Zika in Singapore.

It marked the launch of Project Wolbachia's third phase, which aims to find out whether the suppression of the Aedes aegypti mosquito population - the primary species responsible for transmitting the two diseases - can be sustained in larger areas, said NEA.

The third phase follows the successful reduction of the Aedes mosquito population in the trial sites of Nee Soon East and Tampines West to 20 per cent and 50 per cent, respectively, last month.

The role of the Wolbachia-Aedes mosquito, which does not bite or transmit diseases, is to control and reduce the Aedes mosquito population.

Dr Amy Khor, Senior Minister of State for the Environment and Water Resources, who attended the launch yesterday, said: "We anticipate that climate change is going to worsen the spread of mosquito-borne diseases, with higher temperatures... and increased rainfall."

The number of dengue cases has been rising since December last year, increasing by 560 cases to 1,071 cases last month, she added.

"We still need to remember that the Wolbachia technology is still under research and it is not a silver bullet... We will use it as a complement to our existing mosquito control efforts, so community vigilance and action remain critical," she said.

Yesterday, three of these male Wolbachia-Aedes mosquitoes were released for every person in Nee Soon East, but the NEA will adjust the number of mosquitoes to be released to maintain the current mosquito population, or to suppress higher numbers in the expanded area.

Mosquitoes will be released twice-weekly around the Housing Board blocks and along the common corridors of 84 blocks in Nee Soon East.

The third phase sees an even greater number of households taking part in the study: 7,950 in Nee Soon East and 5,560 households in Tampines West. 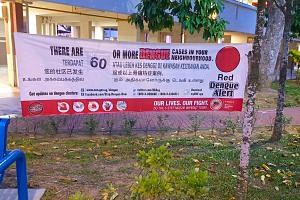 Rise in dengue cases in past month; 455 cases reported over two weeks in January

The first small-scale field studies in Braddell Heights, Nee Soon East and Tampines West examined the behaviour of the Wolbachia-carrying Aedes aegypti in the urban environment, such as how far and high the mosquitoes fly, and how well they could compete with their wild counterparts to mate with females. The result was a 50 per cent suppression of the Aedes mosquito population.

The study has also resulted in several innovations from a tie-up between the NEA's Environmental Health Institute and local start-up Orinno Technology.

For instance, an improved larvae counter has made it faster to fill a tray of water with 4,000 larvae - from two hours to less than three minutes - speeding up the mass production and sorting of the male Wolbachia-Aedes mosquitoes.

Another device, a pupae counter that counts and dispenses male Wolbachia-Aedes pupae into each release container, is 15 times faster than manual counting methods.

Yesterday, a lightweight and portable release device to launch mosquitoes was showcased, in addition to the usual method of releasing the mosquitoes from jars.

Other devices being developed are an automated feeding system, a pupae separator and an adult mosquito sex sorter.

Five intellectual property patents have been filed for these devices, which have attracted interest from other international programmes also producing male mosquitoes to suppress mosquito populations.