Two hundred years ago, Singapore and the rest of South-east Asia were covered with large swathes of relatively unexplored jungles.

As they explored the Malay archipelago, they collected specimens which today are still useful in helping scientists understand more about the natural heritage in Singapore and the region.

Yesterday, the two men's contributions were commemorated as their statues were unveiled at the National University of Singapore's (NUS) Lee Kong Chian Natural History Museum. This coincides with Singapore commemorating its bicentennial year.

Dr John van Wyhe, a historian of science at NUS, said the systematic recording of wildlife in Singapore was relatively recent.

"If it weren't for Wallace's collections, we wouldn't be able to reconstruct the biodiversity in Singapore that was here 150 years ago," he told The Straits Times.

Wallace's eight-year expedition to collect specimens in the Malay archipelago spanned 1854 to 1862.

In 1855, he met Ali, a local in Sarawak, and hired him as a guide and cook. And as their relationship grew, so did Ali's involvement in Wallace's work.

He eventually became an assistant to Wallace in the field as well. Ali shot and skinned a large proportion of Wallace's bird specimens and accompanied him throughout his journeys, including Singapore. 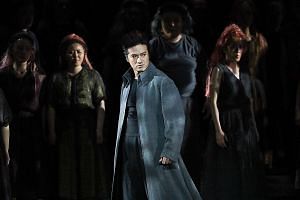 They collected over 125,660 specimens of insects, birds, reptiles, mammals and shells.

Said Dr van Wyhe: "These samples were sent back and sold to museums and private collectors, where they were studied, published and ended up being part of the body of scientific knowledge in that era."

Senior Minister and Coordinating Minister for National Security Teo Chee Hean, who was guest of honour at the event, commended the duo for their spirit of adventure, collaboration and environmentalism.

Wallace had raised concerns over the environmental impact of human activity - tales of caution which have become more relevant than ever, said Mr Teo.

Governmental efforts were not enough, he added.

Citing Prime Minister Lee Hsien Loong's National Day Rally speech, in which he sounded the clarion call for Singapore to take climate action, Mr Teo said: "We need all our citizens, organisations, scientists and research community to work together and contribute ideas, so we can better understand climate change, contribute to global efforts to mitigate greenhouse gas emissions, and adapt to climate change to safeguard our island for years to come."