SINGAPORE - Things are now going swimmingly well for an otter pup called Toby by the otter watching community here, despite a rough start in life.

On May 9, the six-week-old smooth-coated otter pup almost drowned after it fell off a ledge into a canal near Fort Road.

It was rescued by retiree and property investor Patrick Ng, 60, who dived in to fish Toby out of the waters. "After rescuing it, I left it on the ledge near the entrance to its holt and quickly swam away, in case the adults came back," Mr Ng said. 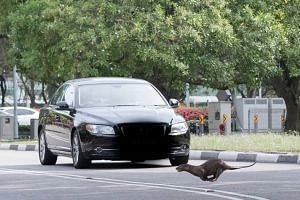 But the adult otters did not. The otter watching community later realised Toby's family had not returned for it when they found a new home nearby.

At 6pm that day, the pup was rescued and sent to Wildlife Reserves Singapore (WRS) for treatment.

Things took a turn for the better on Thursday (May 19), when the Marina 9 pack, as the family is affectionately known, was reunited.

As the pack scurried off into nearby vegetation, an adult otter was seen carrying Toby in its mouth, which is how animals such as otters move their young before they are strong enough to do so on their own.

The reunion was made possible thanks to the joint efforts of otter watchers from the informal community OtterWatch, scientists from the National University of Singapore (NUS), staff from the National Parks Board (NParks), as well as veterinarians from the Wildlife Reserves Singapore.

Ever since the Marina 9 were observed to be making regular crossings across East Coast Park Service Road to get between their holt and the sea, the OtterWatch community has been closely monitoring the pack to look out for the safety of the otters and other road users.

Last Monday (May 9), they noticed Toby peeking out of the holt, seemingly alone. It eventually ventured out onto the ledge and later fell into the canal.

Otter pups rely on their mother for milk, and are usually fed several times a day.

The pup could have emerged from the holt in the first place as it was hungry and searching for its parents, said Mr N Sivasothi, a lecturer at NUS' department of biological sciences who was involved in the rescue effort.

With only an hour of daylight left, rescue efforts were carried out at 6pm, and the pup was sent to WRS for treatment. Otter watcher Jeffery Teo, 44, who was part of the rescue team, said Toby was hiding inside a narrow trough.

While under WRS' care, Toby was nursed by Dr Serena Oh, assistant director of the WRS veterinary department. The pup was bottle-fed regularly, given a Vitamin B injection and dewormed. It showed positive signs of recovery throughout this period, WRS and NParks said in a joint response to media queries.

On Thursday morning (May 19), Toby was deemed strong enough to be released back into the wild.

It was also important to ensure that the wild otter pup did not get used to humans, Mr Sivasothi said. Wild animals usually keep a distance from people they encounter, which makes them less susceptible to cases of poaching, abuse, or "well-intentioned help", when people try to help animals that do not need rescuing, he added.

As the otter watchers had consistently monitored the movements of the pack, rescuers had a better idea of where the pup should be placed so the adults would notice it.

Toby was initially placed in a carrier it was used to, which was further surrounded by a pet fence to prevent it from wandering. But the pup was quiet and did not emerge from the carrier.

"The strange structure, and the lack of vocalisation from the pup, made the adults wary, although they did make a few attempts to get near," said Mr Sivasothi.

So the team tried a different strategy.

They removed Toby from its comfort zone and placed it on the sand. "It was uneasy and began squeaking and moving around, which immediately caught the attention of the adults nearby. They came over urgently but cautiously, and sniffed the pup," Mr Sivasothi added. The family scurried off together at about noon.

NParks and WRS said post-acceptance monitoring is being conducted to ensure that the otter pup is successfully assimilated into its family.

On the successful reunion, Mr Sivasothi said: "Today I experienced a strong, unencumbered feeling of joy. No doubt about how we did what we did. Still aglow from that wonderful conclusion!"

OtterWatch's Mr Teo added: "The rescue and reintroduction of Toby has demonstrated an unprecedented collaboration and 'make-it-happen' spirit between members of the public and across multiple agencies. Everyone puts in their best, not for pride nor glory, we just want to bring Toby home. This is humanity at its best form."