SINGAPORE - The Republic can expect some respite from the dry weather, with thundery showers expected in the late morning and early afternoon on four to five days towards the last week of August.

On some days, breezy conditions can be expected due to the occasional strengthening of winds over the equatorial region, said the weatherman on Friday (Aug 16).

Despite the occasional rain, dry conditions are still expected on most days in the second fortnight of August as dry air from high pressure systems over northern Australia extends to the equatorial region.

Singapore has been experiencing a dry spell since July 31 and rainfall for August is expected to be "significantly below normal", said Meteorological Service Singapore (MSS).

A dry spell is defined as a period of at least 15 consecutive days with daily total rainfall of less than 1mm.

MSS said that the rest of August is expected to be warm, with daily temperature expected to range between 26 deg C and 34 deg C, with highs of around 35 deg C on a few days. 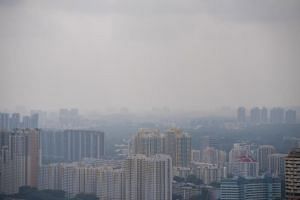 When prevailing winds from the south-east bring in warm and humid air from the surrounding seas, the minimum temperatures on some nights can be around 28 deg C.

The prevailing south-west monsoon conditions are forecast to persist over Singapore and the surrounding region for the rest of the month, and extend into October.

During this period, the prevailing winds are forecast to blow mostly from the south-east or south-west.

MSS added that the dry weather is expected to persist in Singapore's surrounding region, as hot spots with smoke plumes continue to be observed in various parts of Sumatra and Kalimantan.

"Depending on the direction of the prevailing winds and location of the fires, Singapore may experience occasional haze," it said.

In a separate haze update on Friday, the National Environment Agency said that while there was mild morning haze in eastern Singapore on Friday (Aug 16), the weather is expected to be fair with occasionally windy conditions on Saturday.