Ms Hong, who works as a translator in Takikawa city, about 90km from Hokkaido's largest city of Sapporo, said: "We were woken up at around 3am and had to shield our heads as the whole house was shaking."

She has been living in Takikawa for about a year with her Singaporean husband, who works as an English teacher.

"My dish-drying rack fell off and some of my plates shattered. We had to use torchlights to navigate our way through the house," she told The Straits Times.

But Ms Hong recovered from the shock quickly and swung into action. Hours later, she was helping the Takikawa authorities translate information on the earthquake, such as where to get water supplies, to English and Chinese so that those who do not understand Japanese know what to do.

She was among the Singaporeans who experienced a 6.7-magnitude earthquake which struck Japan's northernmost prefecture of Hokkaido on Thursday morning (Sept 6).

The Ministry of Foreign Affairs said there are no reports of injuries or casualties involving Singaporeans.

Singaporean Long Shiau Wee, 54, who has been living in Hokkaido for the past eight years, said it was the first time she had experienced an earthquake there.

"I wasn't too worried, because I know the buildings are earthquake-proof," said Madam Long, who is the chief executive of Niseko Village, which is a two-hour drive from Chitose Airport.

Her immediate concern was for the guests. 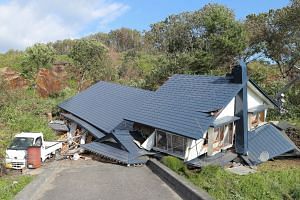 There are two hotels with a total of about 700 rooms at Niseko Village.

"It's not too chaotic here, but the guests are quite anxious. Thankfully, basic needs such as water and the mobile Internet are not affected, and we are still able to provide food for guests for now."

Tour agencies here said they were in touch with customers affected by the quake.

Chan Brothers said it has several groups of tourists in Hokkaido who experienced power and water supply disruption. But all of them are safe and have contacted their families back home.

Said Chan Brothers spokesman Justine Koh: "For two of the groups, we have also made necessary changes to the programme... which includes replacing some of the affected attractions with alternatives due to the local conditions."

Chan Brothers has not received any requests by its travellers for an earlier return to Singapore.

Dynasty Travel said it did not have any tour groups in Hokkaido.

However, about 300 travellers are set to depart for Hokkaido from late September to December. Dynasty Travel said it will monitor the situation.