The $217 million Tuas Desalination Plant can produce up to 30 million gallons a day (mgd) of drinking water, the amount used by around 200,000 households daily.

At the plant's opening on Thursday morning, Minister for the Environment and Water Resources Masagos Zulkifli said water is an existential issue for Singapore.

"Desalination, like Newater, is a weather-resilient water source. It helps us better cope with the threat of climate change," he said, referring to the high-grade reclaimed water known as Newater. Singapore also relies on water from local catchment and imported water.

The new plant is the first owned and operated by national water agency PUB, with SingSpring and Tuaspring both run by Hyflux. The water treatment facilities operator has been in the news recently for its financial woes and is seeking to sell the loss-making Tuaspring plant.

In response to media queries, PUB water supply (plants) director Bernard Koh said: "PUB's decision to run this plant on our own was not triggered by any lapses or inefficiencies experienced by the private sector."

Instead, he said the move allows PUB to build up its water treatment skills, and implement its own research and development projects. 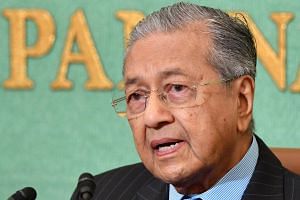 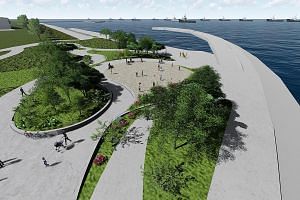 Will desalination affect our sea water?

Yet in terms of the amount of water purified for its size, Tuas Desalination Plant is the most space efficient desalination plant in the world, said a PUB spokesman.

It is also the first to use solar power and the most technologically advanced.

More than 7,000 sq m of the new plant's roof will be covered by a photovoltaic system, and when online, the solar panels can generate 1.4 million kilowatt-hours of energy a year, enough to power more than 300 four-room flats in the same period. However, in a sign of how much electricity is needed for desalination, this is enough only to run the plant's administrative building - less than 1 per cent of the total facility's needs.

Tuas Desalination Plant is also the most technologically advanced.

By combining two methods used separately in Singspring and Tuaspring, the lifespan of its reverse osmosis membranes - where the final stage of purification occurs - increases from as little as two weeks to one month.

When asked if his comments meant that Singapore's quest for water self-sufficiency has become more pressing, the Lee Kuan Yew School of Public Policy's Cecilia Tortajada noted that the new desalination plant was planned years ago.

The senior research fellow from the school's Institute of Water Policy added that PUB has always taken a long-term view of Singapore's quest to become self-reliant in water.

She said: "The urgency to become water self-sufficient is not new and has always been a priority for Singapore… Johor is a very important source of water, but so are Newater, desalination, and local catchments, and PUB has been working on all of them."