Whole-of-nation effort needed and will require hard trade-offs to be made: Grace Fu

Singapore is setting out towards a sustainable future as it recovers from Covid-19, with seven ministers detailing the country's green plans in Parliament during an omnibus session yesterday.

Over about five hours, they announced sweeping new measures that will change the way people live, learn and play - building on the Singapore Green Plan 2030 framework that was announced last month to inform the Republic's sustainability journey.

For instance, buildings, which contribute more than 20 per cent to national emissions, will be made more energy-efficient under a new edition of the Singapore Green Building Masterplan.

A renewed push for electric vehicles looks set to reduce emissions from the land transport sector, which is now responsible for 14 per cent of Singapore's emissions.

Park spaces will be increased and more green infused into the grey cityscape, while even recreational spaces, such as Sentosa, will be transformed into a carbon-neutral destination by 2030.

In schools, environmental education will be strengthened and deepened, with learning resources featuring sustainability initiatives within the school developed to help make the learning come alive.

These initiatives come on top of strategies to beef up the nation's resilience to the impact of the changing climate - including shoring up of coastlines to buffer against rising sea levels and investing in local production to increase food security.

"Climate change is the defining crisis of our time," Senior Minister Teo Chee Hean said yesterday, who added he was confident that Singapore would "rise to the challenge".

But the challenge that climate change poses for Singapore is an asymmetrical one, said Mr Teo, who chairs the Inter-Ministerial Committee on Climate Change.

Singapore contributes 0.1 per cent to global emissions, but the impact of climate change would affect the country too, he said.

The Republic depends on a collective effort to address the issue at a global level, he added, but Singapore must also do its best to tackle climate change. 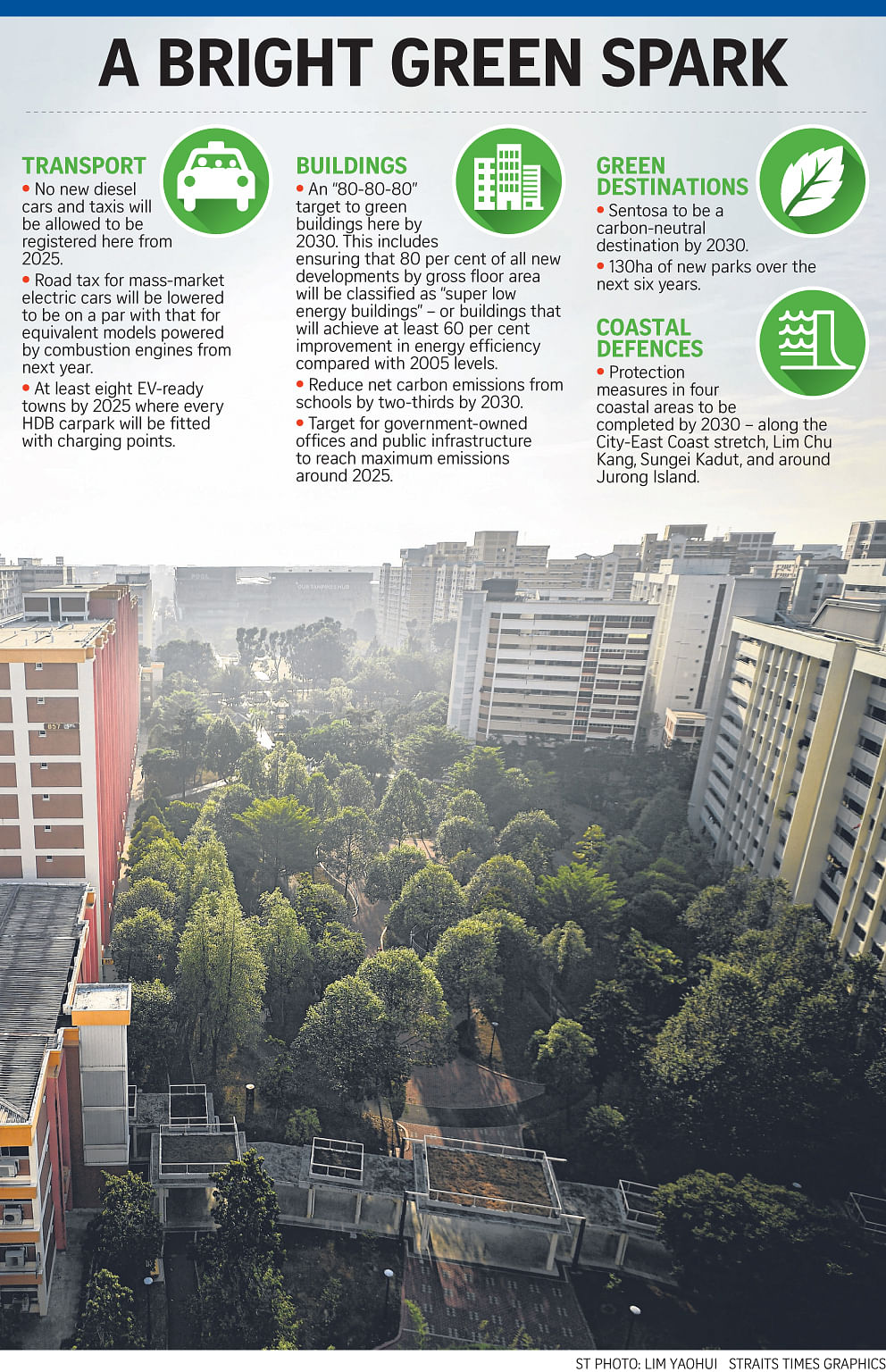 Mr Teo added during the debate on the Government's sustainability plans: "My colleagues, from five ministries which are taking key measures for climate action in our Green Plan, are collectively responding to the points that members have raised... and presenting the comprehensive action we are taking to put words into action to fight climate change."

The five ministries spearheading the Green Plan are the ministries of Education, National Development, Sustainability and the Environment, Trade and Industry, and Transport.

Minister for Sustainability and the Environment Grace Fu noted that getting to a sustainable future will be a whole-of-nation effort, requiring every government agency, individual, business, research institution, community group and civil society organisation to work in unison.

"Each challenge and its associated solution will impact on another," said Ms Fu. "This requires hard trade-offs to be made, and close coordination in execution."

Second Minister for Trade and Industry Tan See Leng said, for instance, that stepping up electricity infrastructure for use by electric vehicles in the coming years will require the Trade and Industry Ministry to work closely with the Transport Ministry.

The need to balance between trade-offs, and the importance of every individual playing his role in the green transition, were recurring issues.

Trade and Industry Minister Chan Chun Sing highlighted how it was important to pace transformation, to ensure that industries are not displaced by sudden economic structural changes. "When we review our carbon prices, we must be conscious of the impact that this will have on our current and future competitiveness and the consequent impact on the jobs and livelihoods of all Singaporeans," he said.

However, at the same time, there are opportunities in the green economy that workers can take advantage of by upskilling and re-skilling, he said.

Ms Fu said Singapore's efforts alone will not turn the tide. She added: "But if we can succeed in our plans, we will show the world how a small country with severe constraints is nevertheless able to take bold action, and pave the way for other countries to adopt new solutions. 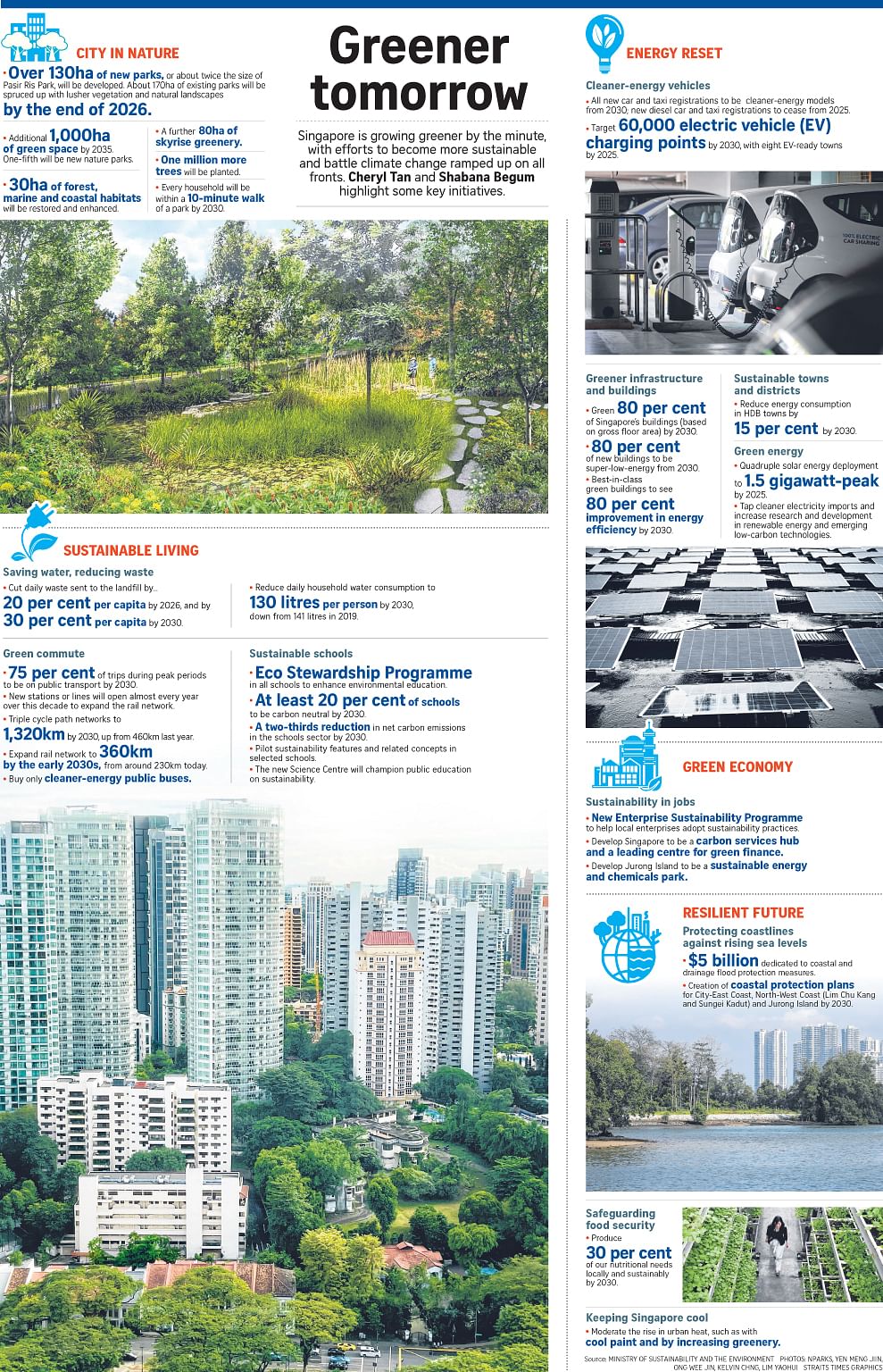