SINGAPORE - The Republic may envision itself as a zero-waste nation, but new statistics show the country still has some ways to go in achieving this.

Despite the slew of measures to make recycling easier, people recycled less waste last year (2017) compared to the year before.

The decline took place despite national efforts to encourage people to recycle more.

For instance, every HDB block has been provided with a blue recycling bin - up from one bin for every five blocks.

This was implemented in 2014, the same year the Government announced that all new public housing projects will be fitted with recycling chutes, with throw points on every floor.

The chutes are for items such as books and newspapers, plastic and glass bottles as well as paper and plastic trays for eggs.

The NEA said the decrease in waste recycled last year was largely because lower amounts of wood waste, plastic and paper were being recycled.

This was especially worrying in the case of plastics, which harm the environment. Only 51,800 tonnes were recycled last year, down from the 57,554 tonnes in 2016.

Singapore, however, fared better in the recycling of food waste - a perennial problem for the country.

Food waste, if placed with items that can be recycled, contaminates the whole lot, which the public waste collector then has to dispose of. 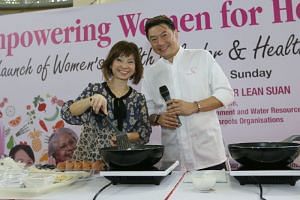 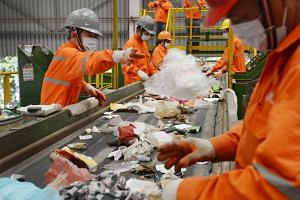 Recycling can be too much of a good thing

NEA attributes the increase to food manufacturers recycling their food waste and greater use of machines that turn food waste into compost.

But proportionally, the amount of waste recycled remained unchanged at 61 per cent, indicating Singapore did not do better.

Separately in Parliament on Tuesday (March 20), Dr Amy Khor, Senior Minister of State for the Environment and Water Resources, said last year's domestic recycling rate was 21 per cent, the same as in 2016.

This was higher than the figure cited in recent media reports, which covered only the National Recycling Programme, she added.

The Straits Times had reported earlier this month that only 2 per cent of total waste generated by the domestic sector in 2016 came from the national recycling effort, in which blue bins are deployed in places like Housing Board estates.

Ms Pamela Low, a member of the environmental group Singapore Youth for Climate Action, said the unchanged figures for 2017 and 2016 suggest the recycling programme may be failing. "Perhaps, it is time to consider rejuvenating our recycling programme."