In its toughest anti-haze measure yet, Singapore has begun legal action against five companies it believes are among the culprits behind Indonesia's polluting fires.

It has also slammed statements from Indonesian officials over the crisis that forced the Republic to close schools yesterday when air quality became hazardous.

Naming the firms for the first time yesterday, Minister for the Environment and Water Resources Vivian Balakrishnan stressed that the haze was a man-made problem that should not be tolerated. "Ultimately, errant companies must know that there is a price to be paid for damaging our health, environment and economy," he said. 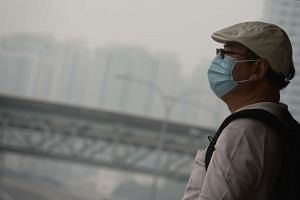 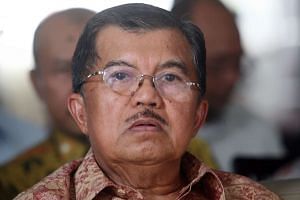 Haze levels here peaked at a 24-hour Pollutant Standards Index (PSI) reading of 267 to 322 at 8am yesterday. They improved slightly later but remained very unhealthy. The three-hour PSI showed greater fluctuations - hitting 341 at 5am and dropping to 80 at 2pm, before rising again to 154 at 9pm.

Unhealthy haze pollution - when the 24-hour PSI is over 100 for at least 24 hours - has occurred four times since Sept 10.

The National Environment Agency (NEA), which has been gathering evidence by monitoring hot spots, smoke plumes, maps, meteorological data and satellite images, yesterday served Singapore-listed firm Asia Pulp and Paper a legal notice to supply information on its subsidiaries in Singapore and Indonesia, as well as measures taken by its suppliers in Indonesia to put out fires in their concessions.

Four Indonesian companies - Rimba Hutani Mas, Sebangun Bumi Andalas Wood Industries, Bumi Sriwijaya Sentosa and Wachyuni Mandira - have been told to take measures to extinguish fires on their land, not to start new ones, and submit action plans on how they will prevent future fires.

Under Singapore's Transboundary Haze Pollution Act, those guilty can be fined up to $100,000 a day, capped at $2 million, for causing unhealthy haze.

Dr Balakrishnan said Singapore will put economic pressure on errant firms. The Government is looking at how to support those with sustainable practices down the supply chain, particularly those in the palm oil and forestry sectors. The results of the NEA's ongoing investigations will also be made public.

Government leaders here, including Law and Foreign Minister K. Shanmugam, spoke out against comments from Indonesian officials. Indonesian Vice-President Jusuf Kalla, for instance, has repeatedly said Indonesia need not apologise to its neighbours over the haze.

Singapore has offered to help fight the haze-causing fires five times, an offer Indonesia has yet to take up.

A version of this article appeared in the print edition of The Straits Times on September 26, 2015, with the headline 'S'pore clamps down on five firms over haze'. Subscribe
Topics:
More
Whatsapp Linkedin FB Messenger Telegram Reddit WeChat Pinterest Print Purchase Article Copy permalink