For many Singaporeans, Pulau Semakau is just an offshore landfill.

But at low tide, one will find the island as well as the waters around it teeming with life, said marine biologist Huang Danwei.

"You will see many mangrove trees and animals that live on these trees, and if you go seaward you will see a very luxurious growth of seagrasses," said Dr Huang, an assistant professor at the National University of Singapore's biological sciences department. "If you go out even more, you will see a reef habitat with lots of corals."

Protecting marine habitats like Pulau Semakau is a goal of the third Blue Plan, which was drawn up by conservationists like Dr Huang, presented to Second Minister for National Development Desmond Lee yesterday.

It contains six recommendations to protect such habitats in Singapore. Among them is a proposal that the coastal areas of certain islands be designated as marine reserves.

These include Pulau Semakau and its neighbours Pulau Hantu and Pulau Jong, as well as Pulau Satumu and Pulau Biola. It also includes Pulau Ubin, which is home to Chek Jawa, one of Singapore's richest ecosystems where a variety of different habitats can be found.

The plan also suggests that the waters around Lazarus, St John's and Kusu islands be made no-fishing areas as they are established sites for coral nurseries. The latest Blue Plan states that: "Although marine habitats in Singapore are fragmented and small, these sites are each unique and host high diversity." For example, the tiny islands of Pulau Satumu and Pulau Biola have a wide variety of corals and other marine organisms.

The Blue Plan notes that protecting the waters around these islands is "urgent as there are signs ship grounding have destroyed portions of these reefs". 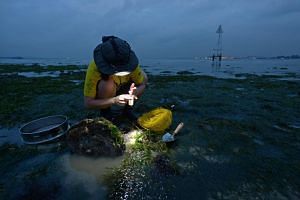 The movement to protect marine habitats in Singapore has come a long way in the past few decades.

Speaking to the audience at yesterday's event, veteran marine biologist Leo Tan recounted his struggle to get Labrador Nature Reserve designated as a protected area many years ago. "I started on a lonely journey in the 1970s trying to save one 300m stretch of rocky beach in Labrador," Prof Tan said. "It took 30 years before it was legislated as a nature reserve."

In the 1980s and 1990s, non-governmental organisations initiated efforts to survey and conserve Singapore's coral reefs.

This year's 220-page Blue Plan is the most extensive yet, with more than 100 contributors from various fields. Mr Lee, who is also Minister for Social and Family Development, yesterday emphasised the importance of grounding such conservation efforts in science.

"Only by understanding the marine ecosystems and their complexities better, can we develop sustainable solutions to manage and maintain them," he said.

A version of this article appeared in the print edition of The Sunday Times on October 14, 2018, with the headline 'Semakau - not just a landfill, but full of life'. Subscribe
Topics:
More
Whatsapp Linkedin FB Messenger Telegram Reddit WeChat Pinterest Print Purchase Article Copy permalink