They will try to reach the internal organs and gut by cutting through the outer layers of fat and muscle. Before starting the dissection, the researchers inserted metal tubes into the carcass to release gases that have built up in the abdominal area.

Their work will include taking samples of its muscle tissue, which contains precious genetic information, and studying the contents of its stomach.

The museum’s scientific officer, Mr Foo Maosheng - one of the team members - said: “By studying its stomach contents, we can possibly tell where it has been feeding and at what depths.”

The species had never previously been found in the waters around Singapore or peninsular Malaysia.

Oil industry worker Mr Jailani Salleh told The Straits Times that he spotted the dead mammal under a jetty at around 7.45am and posted a video of it on Facebook.

Mr Marcus Chua, curator of mammals and birds at the Lee Kong Chian Natural History Museum, was informed and told The Straits Times it was an “exciting find”. It is to be studied by scientists.

The museum will now work to preserve the specimen, believed to be a young adult. A museum volunteer then informed Mr Chua about the incident at about 9.30am.

At about 2pm, after arrangements were made with the authorities to enter restricted areas and to secure equipment and boats, Mr Chua and eight of his colleagues were deployed to secure the carcass. The cause of death has not yet been determined.

When The Straits Times visited the scene, blood was pouring from its fin. However, Mr Chua said the injury could have been sustained after it died. It was too early to conclude that the wound was the cause of its death, as it could have been afflicted posthumously.

The whale appeared to have been dead for several days because of the rot on its body and tongue. With the help and assistance of the Maritime and Port Authority of Singapore, the whale was towed across the West Johor Strait on a three-hour journey to the Tuas Marine Transfer Station for further examination.

Searchlight deployed to help authorities get whale carcass on shore

It will be left there at the restricted location for around a week while researchers prepare the skeleton and collect data. 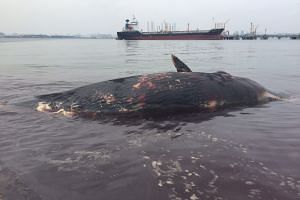 5 things to know about sperm whales

Since its bones are porous, researchers must figure out the best way to remove the oil from them while preserving the skeleton, which is important as it will tell researchers more about its length and anatomy.

Ms Isabelle Tan, 23, a dolphin researcher and campaigns executive from the Animal Concerns Research and Education Society, said: "It is encouraging to know that this species of whale was found in our waters, especially as people often think Singapore has no marine life.

“The sightings are a good reminder that they are there and there is a need to protect the marine environment.

"We urge members of the public to continue reporting dolphin and whale sighting to Acres."