SINGAPORE - Pest control firm Rentokil is investigating the incident of a dog being poisoned by rat poison along the Singapore river, but says the recent death of an otter is unlikely to be due to the same poison.

Otter watcher Nick Soo had shared a Facebook post made by Ms Amy Parsons on the Nature Society's page, in which she said her dog was poisoned by a blue rat poison left out along the Singapore River.

Ms Parsons, a 38-year-old teacher, told The Straits Times that she was walking her dog on June 1 when it ate a blue block on the path, right outside the Grand Copthorne Hotel.

"He sniffed it and ate it," she said. "I didn't think a lot of it but I kept walking and saw more blue blocks in the bushes."

She took her dog to Town Vets at Havelock Road, where the vet confirmed it was rat poison and induced the dog to throw it up.

Last week, an otter disappeared after being observed to be sickly over several days and was presumed dead. It was suspected that it could have died from poisoning.

A spokesman for Rentokil told The Straits Times on Monday (June 12) that they believe the dog incident is "an isolated one".

"Following the report on June 1 by the dog owner, our team has acted immediately by conducting a full site investigation and removed remaining traces and presence of rat baits," said the spokesman.

She added that Rentokil has been in touch with Ms Parsons and her dog has been certified well by a vet. "We continue to monitor the premise," she added. 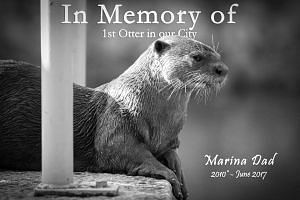 The reason for the otter's death is unknown, and it is unlikely that there is a connection between the rat poison and its death, she said.

"Anticoagulant rodenticide, which are typically placed in planter rodent burrows consist mainly of grains and wax with a bitter agent formulation that makes it non-palatable and deterring accidental ingestion by non-targeted species," she said.

It is designed specifically for rat control and it is unlikely that otters will eat it "given their palatable diet, such as fish and marine shellfish".

Even if consumed, the quantity is too low to cause major damage to the animal, Rentokil said.

The rodent bait, which has a lethal dose used for rat control, requires the targeted species to consume significant volume of the bait to display a 50 per cent likelihood chance of adverse symptoms.

Rentokil's spokesman added that safety is a key priority at Rentokil and that its products meet the regulations and standards of the Control of Substances Hazardous to Health Regulations and National Environment Agency (NEA).

"We would like to assure the public that Rentokil has robust standards in place to safeguard the health and safety of our clients, their premises and the public," said the Rentokil spokesman.