The more you waste, the faster you hasten the onset of an unlivable world. What to do and how to help yourself?

You were among 5.7 million residents who produced 7.23 million tonnes of solid waste in 2019. That's roughly the weight of 530,000 double-decker buses.

That's a significant amount of waste for a city-state of just 728 sq km. Less than half your waste - 40 per cent - was incinerated at Waste-To-Energy (WTE) incineration plants.

With Lim Chu Kang Dumping Ground and Lorong Halus Dumping Ground filled to capacity and closed in 1992 and 1999 respectively, Singapore has only one remaining landfill. And Semakau is estimated to be full by 2035.

How low can we go in what we waste? Will our wasteful ways hasten our decline? The solution, say experts, lies in a strategy that balances economic growth with ensuring a sustainable environment.

Minister for Sustainability and the Environment Grace Fu, at an event last September, said a leaner Singapore is one which "is closer to zero waste, and more efficient in our use of resources".

The ministry is working with the industry and community to pursue circular economy approaches in production and consumption.

What is the circular economy?

Unlike the typical linear "take-make-use-dispose" economy, the ideal circular economy releases zero waste into the environment. 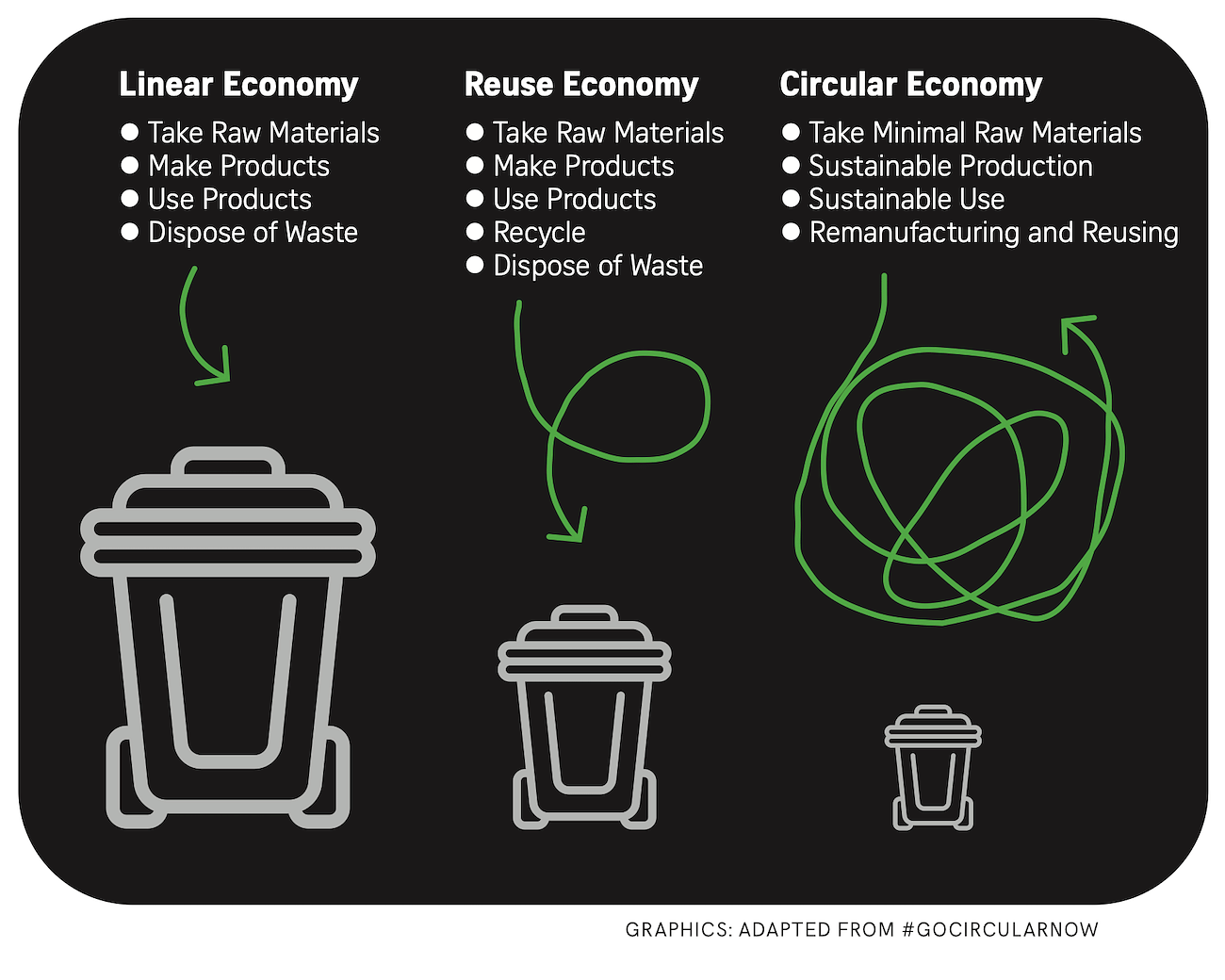 Singapore is shifting from the linear economy to the reuse economy, where we recycle as much waste as possible. In 2019, 59 per cent of solid waste was recycled.

Singapore's construction industry is a good example of a zero-waste cycle. Construction and demolition waste is collected, sorted and processed meticulously.

Metals, plastics, paper and wood are retrieved and sent to local recycling companies. The remaining waste, such as concrete, bricks, gravel and stones are crushed and formed into recycled construction materials for reuse.

About 99 per cent of materials are recovered and recycled or reused through companies such as Samwoh. Dr Ho Nyok Yong, Samwoh's chief operating officer, says: "The idea is to create systems that will allow future generations to live in a sustainable and responsible manner."

In June last year, the Real Circularity Coalition, an international network of NGOs, campaigners, academics, politicians and business leaders, concluded that a circular economy can help in the climate crisis and in tackling the waste problem.

In an open letter to world leaders, it said: "A real circular economy could once and for all realise the vision of a world free from the connected problems of runaway climate change and the global waste crisis."

Is a Zero Waste Singapore possible?

In 2019, Singapore declared its goal of becoming a Zero Waste Nation, aiming for a 30 per cent reduction in waste dumped into the Semakau Landfill by 2030. Last year, waste production was down by 19 per cent, according to statistics from the National Environment Agency (NEA).

Speaking at the launch of the "Change the Present, Save the Future" exhibition last month, Mrs Fu said that to address e-waste, packaging waste and food waste, Singapore will promote "reduce, reuse and recycle" as a norm for citizens and businesses.

But is a circular economy achievable? Yes, said Monetary Authority of Singapore (MAS) managing director Ravi Menon at an Institute of Policy Studies lecture on Wednesday.

"We have done it with water: Singapore is the first country in the world to achieve circularity in the water sector. We collect every drop of used water, treat and purify it, and turn much of it into clean water again. We can extend the circularity principle to other areas."

Financial institutions, too, can play in the sustainability conversation. UOB's chief sustainability officer Eric Lim says it is a "historic opportunity" for them "to demonstrate the confluence of both purpose and profit in how we support economies, communities and our customers".

He says: "As a financial intermediary, we have a responsibility to help bridge the top-down and bottom-up approaches for the betterment of the planet and its people."

As sustainability becomes mainstream, he says: "Banks are playing an important role in helping customers and investors who are increasingly seeking products with an environmental, social and governance focus."

By ensuring that financing is tied to sustainable outcomes, Mr Lim says financial institutions are well-positioned to channel economic flows towards sustainable development. They do this by providing sustainable, accessible and inclusive financial products and services.

UOB, for example, offers customised sustainable financial solutions for businesses in areas such as circular design and recycling under its Green Circular Economy Framework.

This framework is one of the bank's four frameworks that were developed to make sustainability-linked or green loans accessible to businesses by streamlining loan applications, providing low-cost access, and guidance on their environmental and social impact.

Consumers also have a role to play in pushing the corporate world towards creating a more sustainable planet, says Mr Lim.

"By voting with their wallets in choosing more sustainable products and investments, individuals can motivate companies to stay relevant and to do more in climate action."

Three ways to play your part in the circular economy

In finance and business, green is good

In investment, money can grow on trees

Building Sustainable Cities is a series sharing insights on how individuals and businesses can take action to forge a cleaner, greener tomorrow.