There have been seven pollution incidents along the Johor River since 2017 that caused the PUB's Johor River Waterworks plant to be shut down temporarily, said Minister for the Environment and Water Resources Masagos Zulkifli yesterday.

They have been traced to illegal discharges from premises such as palm oil mills and chicken farms in the water catchment area, he added.

He said the PUB will shut down the Johor River Waterworks plant whenever the river is affected by upstream pollution.

Similarly, Johor, which has water treatment plants along the river and upstream of the waterworks plant, will shut down its plants too when pollution occurs upstream of them, the minister added.

This year, there have been two pollution incidents, he noted.

The first occurred in January, when an oil palm plantation was discovered to have caused pollution along parts of Sungai Johor. The pollution incident was reported on Wednesday (Jan 16), resulting the Johor River Waterworks plant at Tai Hong being closed temporarily, with the water supply in the area resuming in stages over four days.

The other took place on April 4, when high ammonia levels in the Johor River resulted in the water supply of Kulai town being turned off. 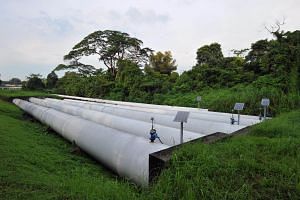 "Given the importance of the Johor River to the water supply of both Singapore and Johor, we have expressed our concern over the frequent recurrence of pollution incidents to Malaysia, both at the federal and state levels," he said.

Mr Seah asked about the impact on Singapore in the event of prolonged stoppage of water treatment operations at the waterworks plant, and the country's obligations to provide treated water to Johor .

Mr Masagos said that under the 1962 Water Agreement, Singapore is entitled to draw 250 million gallons of water per day (mgd) from the Johor River.

Johor, meanwhile, is entitled to buy treated water of up to 2 per cent of the total quantity of water Singapore imports on any given day or about 5 mgd when Singapore draws its full entitlement.

But in practice, Singapore has been selling Johor 16 mgd of treated water, which is in excess of its entitlement, at Johor's request.

"We do so on a goodwill basis without prejudice to our rights under the 1962 Water Agreement. When we are unable to import any water from Johor owing to pollution, Singapore has no obligation to supply treated water to Malaysia."

Mr Masagos said that during the pollution incidents, the PUB works closely with the Johor authorities to flush the polluted water column from the river.

"Such collaboration between PUB and its Johor counterparts has helped us to manage the pollution incidents... During such temporary disruptions, PUB steps up production at desalination plants and local waterworks to meet Singapore's demand," he said.

Still, pollution incidents along the river "impact the water supply of both countries and remain a serious concern", he added.

"We will continue to engage our Malaysian counterparts on the need for them to take measures to prevent future pollution incidents."