SINGAPORE - To meet Singapore’s water needs and reduce the energy costs of treating seawater, national water agency PUB and its research partner Evoqua Water have announced a new process that can potentially reduce the energy consumption of seawater desalination by half.

Currently, up to 30 per cent of Singapore’s water needs is desalinated by reverse osmosis, a process which pushes seawater through membranes that filter out dissolved salts and minerals.

This form of water treatment, according to PUB, uses about 3.5kwh to produce one cubic m of desalinated water. However, Evoqua Water has developed new desalination modules which use electro-deionisation (EDI) technology. This uses electric currents to remove dissolved salts and minerals from seawater.

These EDI models have been used at a demonstration plant at Tuas since March and are able to treat 3,800 cubic m of seawater per day.

The rate of energy consumption of this plant is at 2.4kwh per cubic m of water treated, according to Mr Harry Seah, assistant chief executive at PUB.

In 2009, PUB and Evoqua Water had shown - using proof-of-concept EDI models - that they could achieve an energy consumption rate of 1.65kwh per cubic m of seawater.

Hence, Mr Seah added that any new desalination plant would also use EDI technology and hopes to bring down the rate of energy consumption to 1.8 kwh per cubic m of seawater by next year as desalination operations are being scaled up at the Tuas demonstration plant. 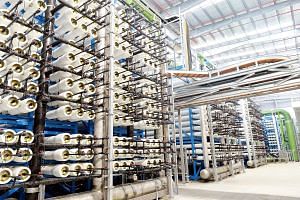 Energy consumption rates aside, Dr Qiao Xiangyi, Evoqua’s research and development manager, said the production costs of the EDI technology have been reduced to a fraction of its original cost - from half a million dollars to about $40,000.