SINGAPORE - An initiative in Tampines Park to convert food waste into nutrients for use in vegetable and fish farming is set to be extended to other parts of the town.

The produce from the farms is currently undergoing food safety checks, said the Singapore Food Agency (SFA) in response to queries from The Straits Times.

Possible sites at blocks 106, 270 and 412 are being explored for their suitability, said the Tampines Town Council.

Known as Sustainability @ Tampines Park, the community-based initiative is a circular ecosystem with a black soldier fly facility, a vertical high-tech farm for vegetables such as lettuce and nai bai, as well as a tilapia fish farm.

Residents can contribute their food waste to the black soldier fly facility, where the insect larvae act as a decomposer and break down the food into frass, which can be used as a fertiliser at the vegetable farm.

The insect larvae - being a good source of protein nutrients - can then be fed to the tilapia.

SFA said the project highlights its "Grow Local" food basket, as part of its strategies to use more spaces in land-scarce Singapore for food farming.

This move comes amid the nation's goals to produce more food locally - 30 per cent by 2030 - to boost its food security, and cut waste to extend the lifespan of the Semakau Landfill.

It said the feedback from residents has been encouraging so far and that the Tampines Town Council is planning to extend the project to other parts of the town as part of its efforts to become a model Eco-Town by 2025.

Madam Lau Soo Peng, 59, who is the site's facility manager, said many residents have made it a habit to bring their food waste for recycling on a regular basis.

She added that quite a number of students have also been helping out at the facility as volunteers.

SFA said trials are still ongoing with the vendors to ensure that the tilapia and vegetables are safe for consumption.

"We are also assessing other factors such as the feed's nutritional value and the amount required for each feed," it added.

Mr Jonathan Poh, director of Otolith Enrichment, told ST that the food waste undergoes two rounds of checks for mould before it is fed to the black soldier flies.

"Despite the measures put in place, we are unable to tell if food waste is contaminated with heavy metals, toxins, pathogens... This area is covered by SFA, where the black soldier fly larvae, frass and produce (vegetables and fish) are collected for periodic food safety testing," he said.

He added that Otolith's role in the project as main facilitator and integrator sees it engaging the community through volunteer management and food waste contribution.

The project in Tampines is using black soldier fly eggs supplied by the National University of Singapore (NUS), said Assistant Professor Nalini Puniamoorthy of the Department of Biological Sciences.

"These flies were locally collected and selectively bred for rearing in urban spaces. Since 2018, they have been 'trained' to convert NUS food waste from residential halls, and are thus generally able to handle the residential food waste in Tampines," she added. 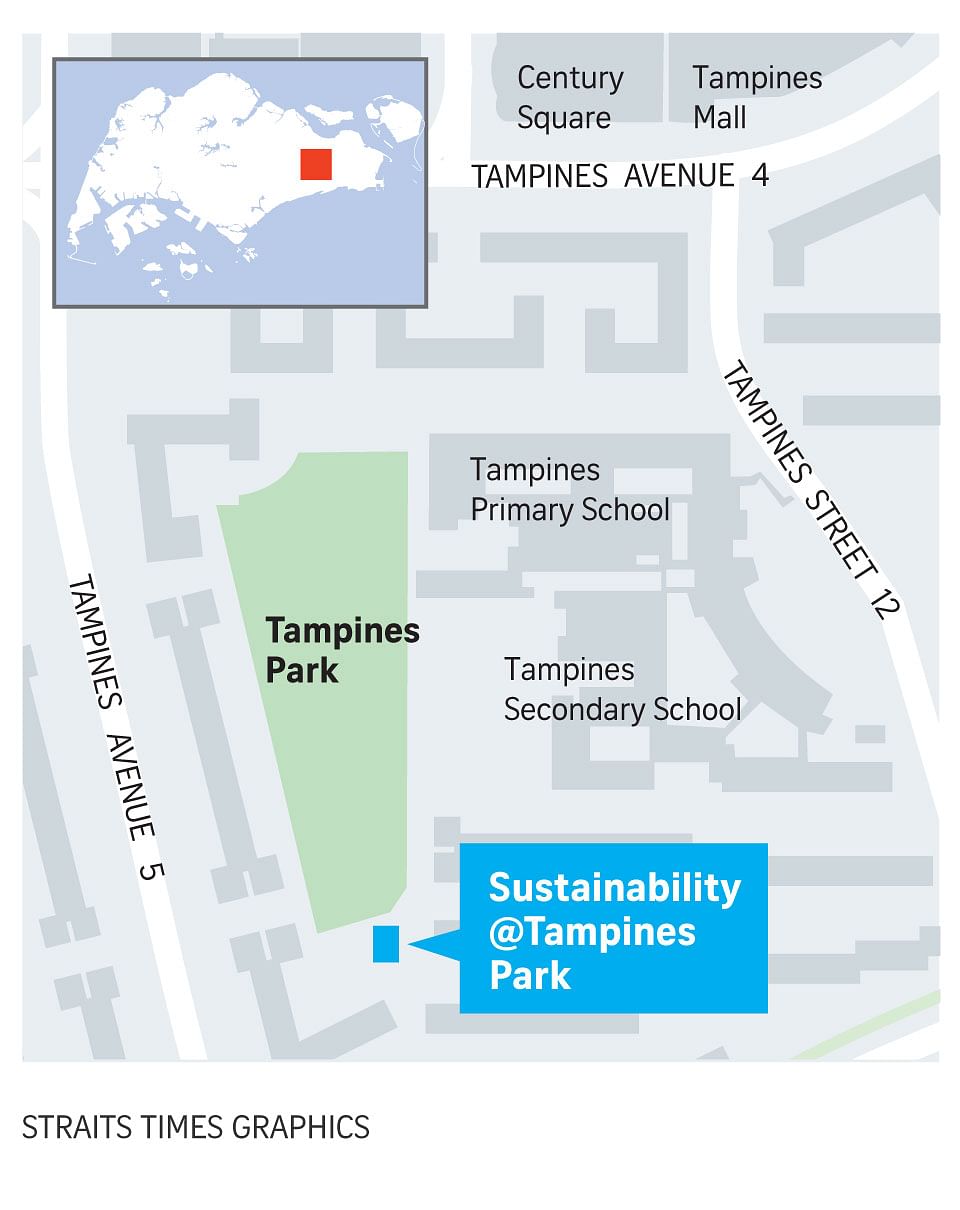 Since the launch of the Tampines project, NUS has supplied about 10 million eggs which have been used to convert more than five tonnes of food waste that would have been incinerated otherwise.

"Food safety is dependent on both the substrate (food waste) as well as the flies themselves. The quality of food substrates in Singapore is actually high, which is why it is a shame to lose this nutrient bank to incineration," she added.

Mr Poh said that besides tilapia fish, it is also possible to farm other freshwater species such as the Jade perch, Marble goby or even the giant freshwater prawn using the black soldier fly larvae.

Plans are also in the pipeline for Otolith to set up decentralised black soldier fly facilities in areas such as the East Coast and Bishan, he added. 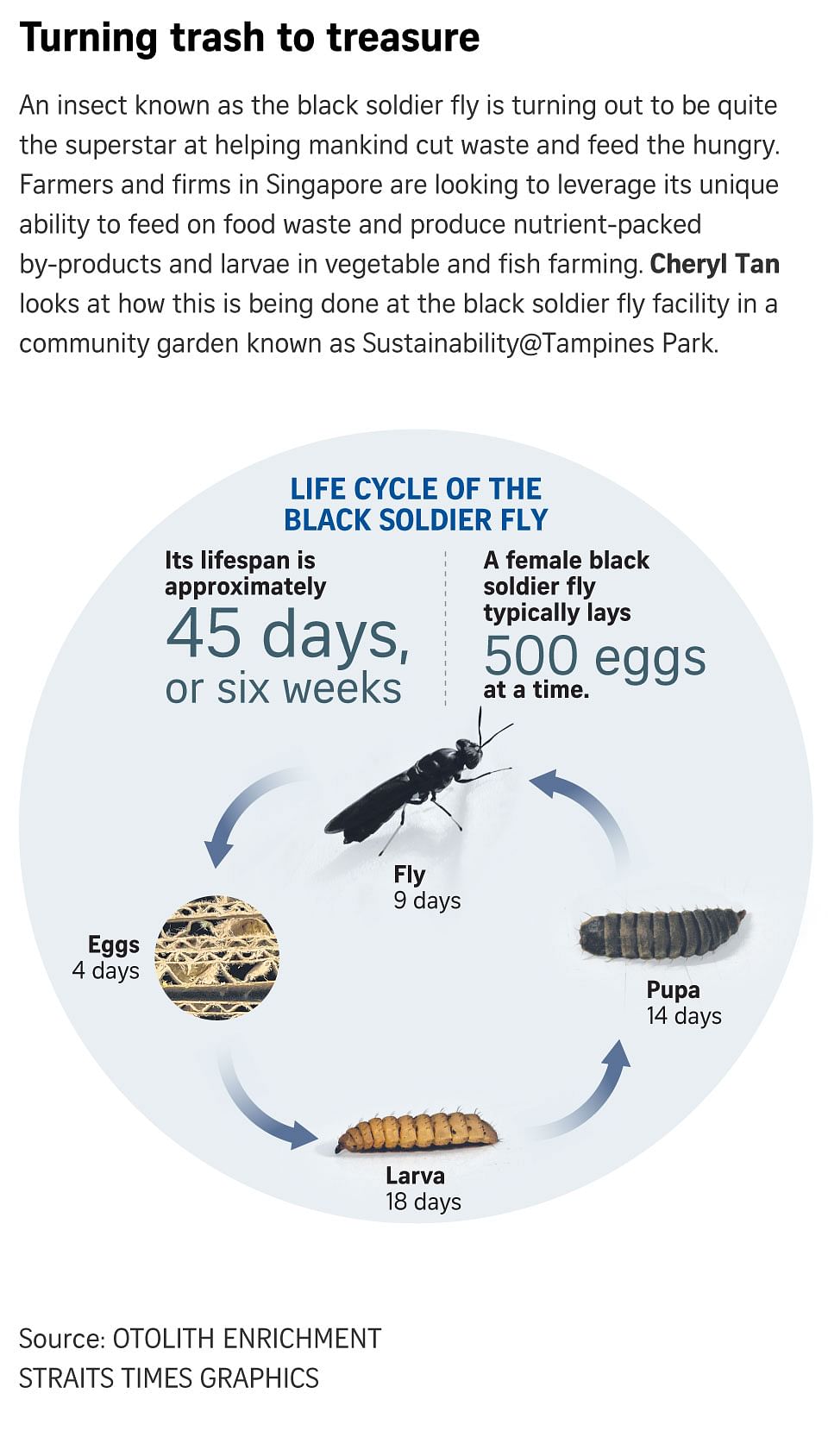