SINGAPORE - When she was one-and-a-half years old, world-famous primatologist Jane Goodall brought home earthworms and was caught trying to take them to her room.

It started the 83-year-old on a journey which led her to being an eminent nature conservationist.

On Sunday (Aug 6), Dr Goodall, who is in Singapore, spoke about the importance of nature conservation at an event to mark the 10th anniversary of the local chapter of the environmental group she founded, the Jane Goodall Institute (Singapore).

Titled One Nature, Together, her talk was a play on this year's National Day Parade theme, One Nation Together.

During the 45-minute presentation, Dr Goodall shared the story of the earthworms. It happened while she was growing up in England.

Surprisingly, her mother was not angry. She said her mother, and later her mentor Louis Leakey, helped mould her inquisitive spirit.

It led to her studying chimpanzees in Africa for more than 50 years, and discovering that nature conservation is a cause worth fighting for.

That inquisitive spirit is something Dr Goodall and her organisation want to mould in people all over the world through its various programmes, including the Roots and Shoots programme that encourages school children to start their own conservation projects.

The institute also conducts bimonthly walks in places such as MacRitchie Reservoir Park and the Bukit Timah Nature Reserve to raise awareness about the primates in Singapore's forests. 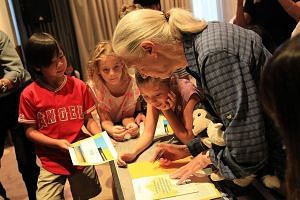 There are no chimpanzees here, but the Republic has two native species of monkeys - the cheeky long-tailed macaque, and the elusive, critically endangered Raffles' banded langur.

Dr Andie Ang, vice-president of the institute, said the belief is that people only care about what they love, and love only what they know. Dr Ang participated in a panel discussion held after Dr Goodall's talk.

Second Minister for National Development Desmond Lee, in his speech at the opening of the event, said nature conservation does not come without challenges in tiny Singapore.

In this space, the Republic has to incorporate infrastructure that is required and consider people who may not be comfortable with wildlife, said Mr Lee.

But he said the key to nurturing a "biophilic city" - a city rich in biodiversity, in which its inhabitants can coexist - is education.

The National Parks Board and nature groups such as the Jane Goodall Institute (Singapore) conduct outreach activities such as free walks to help people learn more about the life thriving in Singapore's nature areas, said Mr Lee.

He urged people to explore these areas with friends and family, citing a recent trip to the Singapore Botanic Gardens he took with his three children. During the visit, they saw a long-tailed macaque walking along the boardwalk. He later turned the experience into a teaching moment for his children, urging them to keep calm and not to excite the animal.

"Some of our actions - for example, if we feed or intimidate them - may also alter the natural behaviour of these animals by making them dependent on human food. They are our neighbours and we must also be mindful of their needs. Beyond just letting them find their own balance, it will require a whole-of-community approach towards animal management," said Mr Lee.

"Singapore is a city in a garden, and this is something we should be proud of and treasure. To succeed, our conservation approach needs to be different from bigger countries - proactively biophilic, community-based and grounded in science."