A spokesman for the fast-food chain said it would keep tabs on how its customers take to the changes before deciding whether to extend them to all outlets here.

FairPrice will also conduct a consumer sentiment survey on plastic bag use.

FairPrice chief executive officer Seah Kian Peng said: "The insights we gain from this trial and the consumer sentiment study will help in developing a well-informed, measured and sustainable actionable plan to reduce plastic bag use." 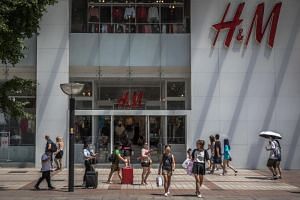 Shoppers seemed open to the idea of paying for plastic bags.

Manager Esther Tor, 61, said she uses plastic bags from her supermarket shopping trips to line her trash bin at home.

"Since I need them for rubbish, I don't mind paying. The charge will also help me to remember to bring my own bag if I don't need any more plastic bags," she said.

Editor Sheri Goh, 43, said it was time for supermarkets to start charging for bags. "We should pay for them if we want them. Many other countries like Australia and Holland have been charging for plastic bags for years," she said.

These moves come on the back of earlier efforts by various supermarket chains to encourage sustainable habits among customers and reduce the impact of human actions on the environment.

In July, eight supermarkets from Cold Storage, FairPrice, Prime Supermarket and Sheng Siong provided donation bins for unused reusable bags from patrons which were redistributed for use.

These efforts are in line with Singapore's Year Towards Zero Waste this year, which aims to raise awareness of the need to reduce waste.