SINGAPORE - Cycling or even walking from East Coast Park to Changi Beach Park could soon be a more comfortable and enriching experience, with plans afoot for a 15km-long green corridor that will connect both parks.

The new central green corridor will run along New Upper Changi Road and Loyang Way, Deputy Prime Minister Heng Swee Keat said on Saturday (Sept 26), and will also connect to other parks and gardens in the area via a network of community corridors.

Residents can also expect more nature-based amenities to be built and connected to this green network in the east, with plans for more community and therapeutic gardens, and nature play gardens for children, said Mr Heng, who is an MP for East Coast GRC.

Speaking on the sidelines of a community event held on offshore Pulau Ubin, which is part of the constituency, he said: "I look forward to partnering our people, especially residents of East Coast, to turn these plans into reality.

"We will reach out to you soon to gather your ideas and vision for these green spaces."

There is no timeline yet for when the green corridor will be ready.

But in the unveiling of plans for how the eastern part of the island will be made greener, in line with the nation's City in Nature aspirations, Mr Heng said the new central green corridor, as well as the network of community corridors, will be planted with a variety of native trees and shrubs so that they resemble the look and feel of natural forests.

The lush greenery will provide a cooler and more comfortable experience for pedestrians and cyclists, he said.

"These corridors will also connect our pockets of green space and enhance their overall biodiversity," he added.

In the video message posted on Facebook, Mr Heng spoke at the Changi Point Ferry Terminal, where he took a bumboat ride to Pulau Ubin to mark Ubin Day, an event organised to celebrate the rich nature and culture of the rustic island.

But the third Ubin Day was not held until 2014, when the Friends of Ubin Network - comprising villagers, academics, nature and heritage enthusiasts - was formed and it became an annual tradition.

Mr Heng said the network brought together diverse perspectives, and has helped to turn good ideas into action, with the community implementing many programmes over the years, including Ubin Day itself.

In previous editions of Ubin Day, there were activities ranging from kayaking to nature walks, as well as film screenings and "kampung" (village) games.

But due to the Covid-19 pandemic this year, people can tune in to a series of Web talks on the island's rich history and culture.

More details can be found here or at the National Parks Board's social media channels.

"This is the spirit of Singapore Together. And I hope we can partner more Singaporeans to build our future Singapore," said Mr Heng. 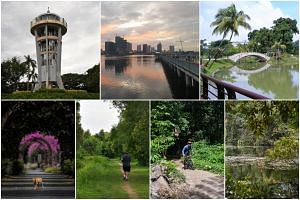 Check out these 7 nature spots that are far from crowds

He also noted that more Singaporeans are venturing into the country's green spaces since the start of the Covid-19 pandemic.

"As we emerge from this crisis, we must continue to grow, and even accelerate, our greening effort," he said.

"I invite all of you to join us on this journey to transform Singapore into a City in Nature and to build a greener, more caring and vibrant East Coast."