SINGAPORE - An otter pup, nicknamed Helios, was reunited with his family on Monday afternoon (Aug 6), after a complex five-day operation including more than 30 people and multiple agencies.

In a Facebook post on Monday evening, otter interest group Ottercity announced that the operation, termed Operation Helios, ended in a success, with the reunion taking place at a pond beside Khoo Teck Puat Hospital.

The pond was 14km away from where the pup was originally found, near Punggol Serangoon Reservoir, said Ottercity.

It was unknown which family the pup belonged to, resulting in otter watchers scrambling to narrow down the possibilities from four possible families that it could have been stranded from.

The Ottercity group, which is run by more than 10 veteran otter watchers, said: "Undisputedly, Operation Helios is by far the most complex otter reunion operation we have ever experienced in Singapore.

"Any wrong judgment to release Helios to the wrong family, would likely cause his immediate kill in front of our eyes."

The mission was led by the Otter Working Group (OWG), OtterWatch, Ottercity and volunteers, and involved agencies such as the Public Utilities Board.

The injured pup was recovered by the Animal Concerns Research and Education Society (Acres) group last Tuesday, before it was sent to the veterinary team at Wildlife Reserves Singapore. It was found to have sustained multiple bite injuries that were likely caused by other otters.

Long-time otter watcher Jeffery Teo, who is a member of the OWG, told The Straits Times that Helios was estimated to be five to six months old, and could have been injured by a lone otter after it got stranded from its family.

He said: "In the past, we never had a problem of identification, it was never in the consideration of who to release to. It was all about the techniques of releasing, the method of releasing and the timing of releasing.

Based on the otter watchers' calculations, Helios could have belonged to at least four families living around an area spanning three reservoirs with multiple river streams, canals and pools.

The groups working to find the otter's family had to first narrow down the family that the otter belonged to, and this resulted a tedious daily search to find the various families to work out it the pup belonged to them.

"We are talking about tens of kilometres, it's like searching for a needle in the sea," said Mr Teo.

With the help of the PUB, which took some watchers out on a boat to survey inaccessible areas, and field reports from various watchers, the groups managed to spot the various families, before systematically narrowing it down to a family of six adult otters and a pup.

The actual operation to reunite the pup with the family then kicked off on Monday afternoon, after otter watchers spotted the family at the pond near Khoo Teck Puat Hospital.

Handlers from the Wildlife Reserves Singapore took the pup out in a cage, with the family responding to the pup's calls soon after.

"All of us (experts from OWG, Acres and WRS)... we made a judgment call that this seems okay, this feels good, let's open the cage," said Mr Teo.

"We opened the cage and we were praying, and the pup got accepted immediately." 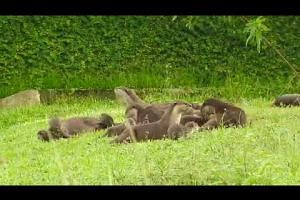 Otters spotted on tarmac at Changi Airport, guided out to beach by airside safety team

He added: "This exercise is indeed very complicated, because if nobody put up the legwork, we would never have found these four families."

The smooth-coated otter, formerly thought to be extinct in Singapore, returned in 1998 as the island's waterways became cleaner.

There are currently around 70 in Singapore. They are distinct from the Oriental small-clawed otters, which can be found in Pulau Ubin.

This is not the first time that volunteers from the otter watching community have come to the rescue of otter pups. Three such cases were reported in the last year.

In December, two lost otter pups from the famous Bishan family were reunited with their family after about 30 hours.

In November, a pup from the Pasir Ris family, aged about eight to nine months, with a wound from a ring around its body, was successfully rounded up and treated.

In January last year, a lost pup aged around two months old from the Bishan family was also rescued.